HP Live Photo was created to allow people to share memories by creating custom augmented reality cards – called Live Photos – using videos on the phone and print them to a home printer. Recipients of Live Photos could use the same app to relive the moments by watching the videos embedded into the cards.

HP, or Hewlett Packard, is a multi-national Fortune 500 technology company that produces a range of consumer to commercial printers and computer systems. HP had acquired technology company Autonomy and was using their Aurasma augmented reality technology with the goal of creating an exciting digital experience that would stimulate print sales. HP Live Photo was created as an internal pilot program and quickly gained traction as a minimum viable product.

My job on the project was to turn the MVP into a compelling app experience for customers new to augmented reality.

I worked on a design team with visual designers Mark Dorn and Alex Gregorich and acted as the bridge to the engineering team to make sure we were designing interactions that could be implemented. I also worked closely with the marketing, engineering, and UX teams to test, debug, consider edge cases, and drive the implementation of the application from both a user-centered as well as a business perspective.

The first step to help people understand augmented reality was to understand their current perception of the technology was. We performed in-depth interviews with 10 participants to learn more about their mental models of the application and technology. 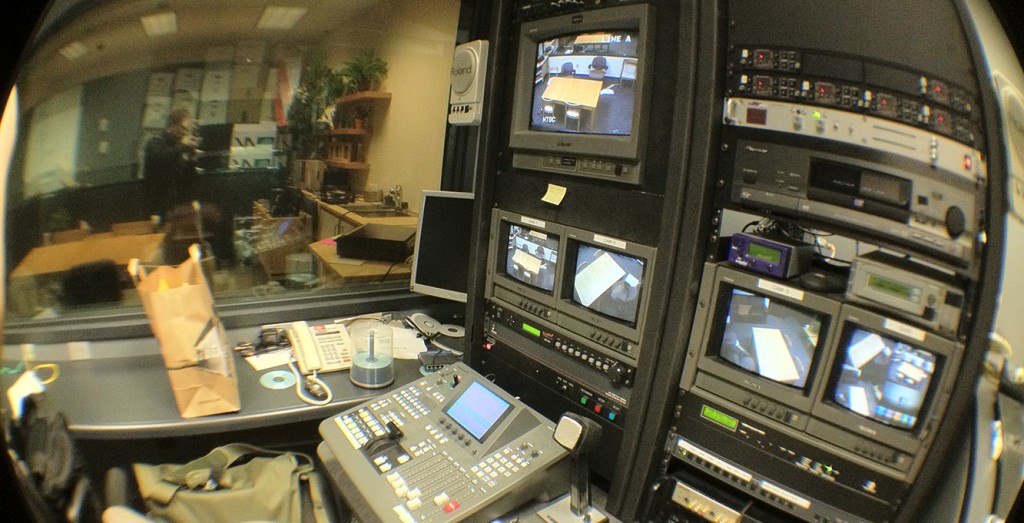 We asked each participant to perform tasks such as logging in, creating and sharing a Live Photo, then probed about their understanding after each one.

Participants had major problems understanding how Live Photo worked until after they had a chance to see it work. Furthermore, they didn’t see the immediate value in the application.

Participants loved the magic of augmented reality but questioned the need to log into Facebook before entering the app. They were afraid that the app would post their personal videos online automatically.

After understanding the application, people compared it to Harry Potter’s magical newspapers and wanted to send these cards out as holiday greetings or on birthdays. We knew we were on to something, but it would be very difficult to get people to understand an interaction that was new and unusual.

No good problem solving challenge comes without constraints. One challenge was the augmented reality viewing experience itself. The viewer acted as a standalone application. We could control everything up until launching the viewer, but were unable to change the UI of the viewer itself.

Second, Hewlett Packard was in the middle of transitioning to a centralized user account and login system, which wouldn’t be ready for several months. Until then, we needed to keep the Facebook login in order to ensure that personal Live Photos stayed private.

Our preliminary research showed that we had a lot to do ahead of us. We set out the following goals to rally the team around and prioritize our sprints.

Our research showed that people understood the application best after trying it themselves. However, the problem was that the experience wasn’t fully digital. First-time users needed a Live Photo to print and view, a wireless-enabled printer, and had to be logged in using Facebook.

We could help Live Photo creators by beefing up the in-app tutorial, but what about the recipients of Live Photos?

We worked in short one-week sprints and attacked the problem from multiple angles:

We started by working with Wirestone to create a few short videos and brought in Nadine Pham as an intern to help envision a use case for college students.

I worked with Nadine to concept, plan, and film this video to target our college-aged demographic.
We also produced a number of other videos targeting single family households.

Once we had the content to get people excited about using the app, we were able to create an in-app welcome video that focused on the features. We decided to create the tutorial video in-house because we knew that it would require many revisions to get right. 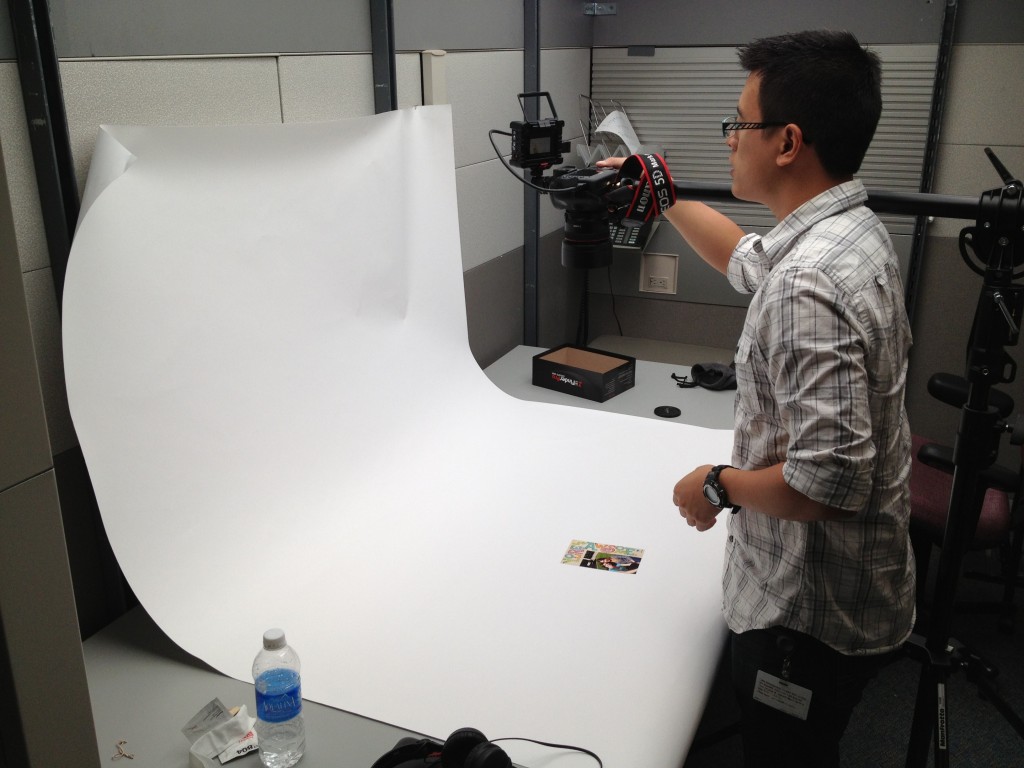 I was able to leverage my video production background to direct, shoot, and edit our welcome videos.

Creating the video in-house allowed us to revise the video during our sprints and get changes in quickly. We went through numerous rounds of user feedback and revisions before settling on the video seen below.

I created our final video in After Effects to speed up production time as the app changed.
The intro video helped reduce the anxiety of logging in with Facebook and encouraged further exploration of the app.

Our usability tests on our mid-fidelity prototypes showed that the welcome video was much more effective at explaining Live Photo than the image sequence alone.

By tweaking the messaging within the video, we were able to create a much more vivid on-boarding experience and reduce the number of introductory screens to two.

TEACHING RECIPIENTS TO USE LIVE PHOTO

Our last on-boarding hurdle was to get recipients of a paper photo to understand the need to download an app to view the Live Photo. We did this by giving Live Photo creators an option to print an instruction card alongside their photo to explain the process.

Our instruction card went through several iterations as the software infrastructure changed.

Goal 2: Let users experience the app without logging in 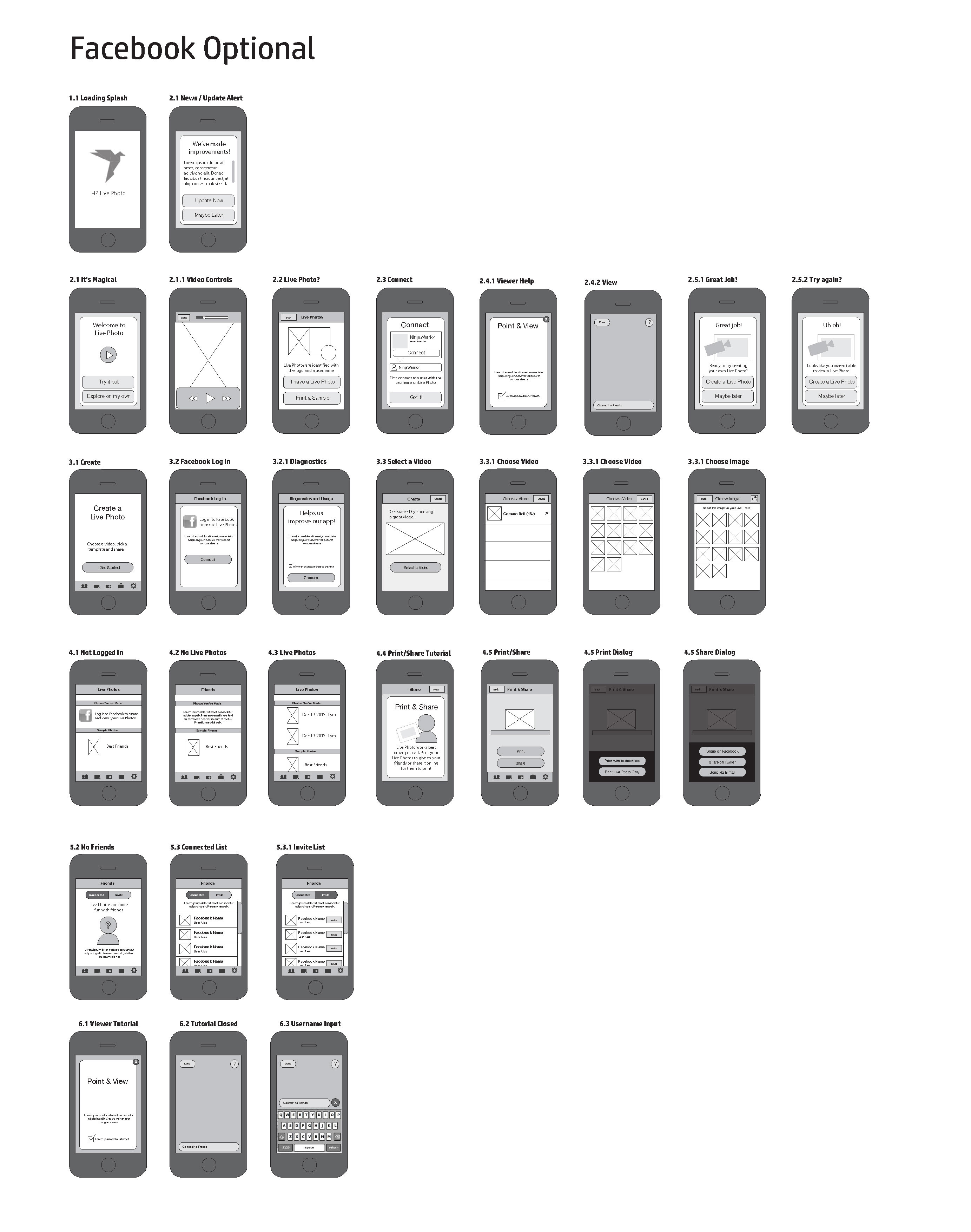 Giving users an option to log in meant that we had to handle twice as many edge cases. These screen represent the various possible states a user could be in depending on if they were logged in or not.

The most seamless way to implement this identification would be to encode our images with hidden information invisible to the naked eye called a discrete digital watermark. Unfortunately, this method has already been patented by Digimarc, so we had to come up with alternative solutions.

These sketches show how the introduction of the Nametag impacted our messaging and edge cases.

Instead, we designed nametags. People could view someone else’s Live Photos by subscribing to the creator using the nametag printed on the Live Photo itself. This only needed to happen once and viewing subsequent Live Photos from that person happened automatically.

Nametags were similar to public Twitter handles and Instagram usernames. Following someone did not require acceptance and it was a way people could creatively apply attribution and branding to their Live Photos.

Nametags allowed first-time viewers to enjoy the application without needing to login. We only required people to login if they wanted to create a Live Photo.
Nametags allowed us to avoid messy account signups, passwords, and confirmation processes.

Once people were in the app, we needed a way to keep people coming back. Our initial research showed that people associated this application with greeting cards they would send to family and friends, we focused our efforts on creating a customization workflow and artwork for special occasions and seasonal holidays. In addition, this would give us a reason to push new updates and relevant content. 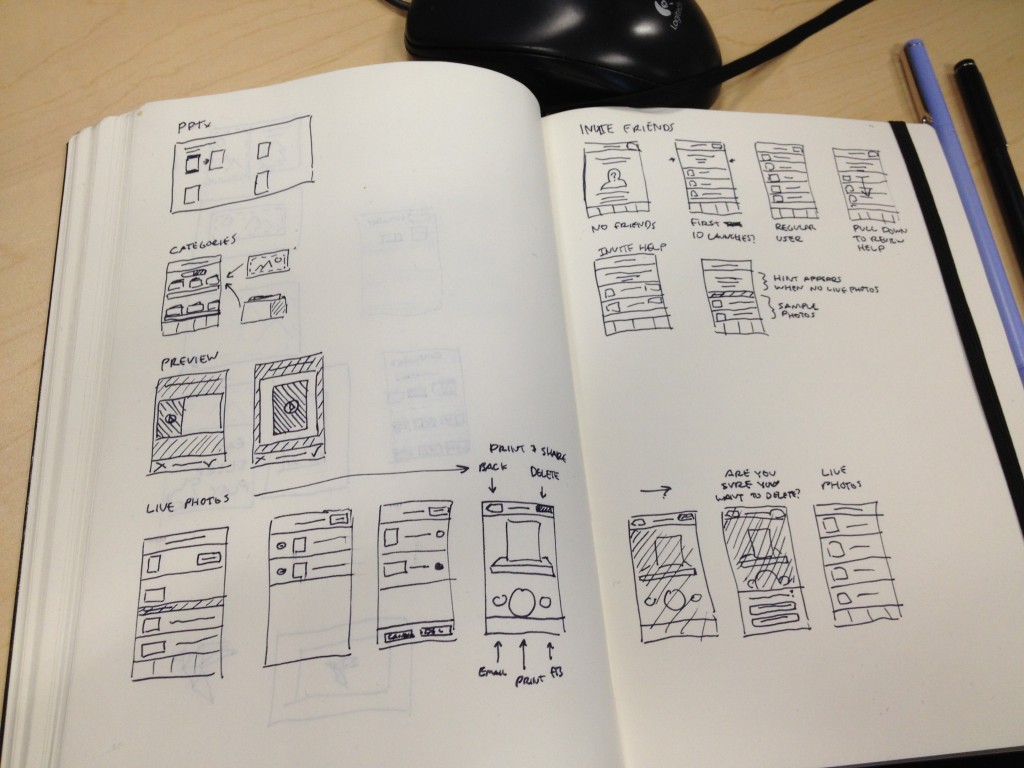 Adding a customization flow meant adding artwork categories and previews to the app.

We used competitive analyses and card sorting exercises to determine which categories resonated with users. 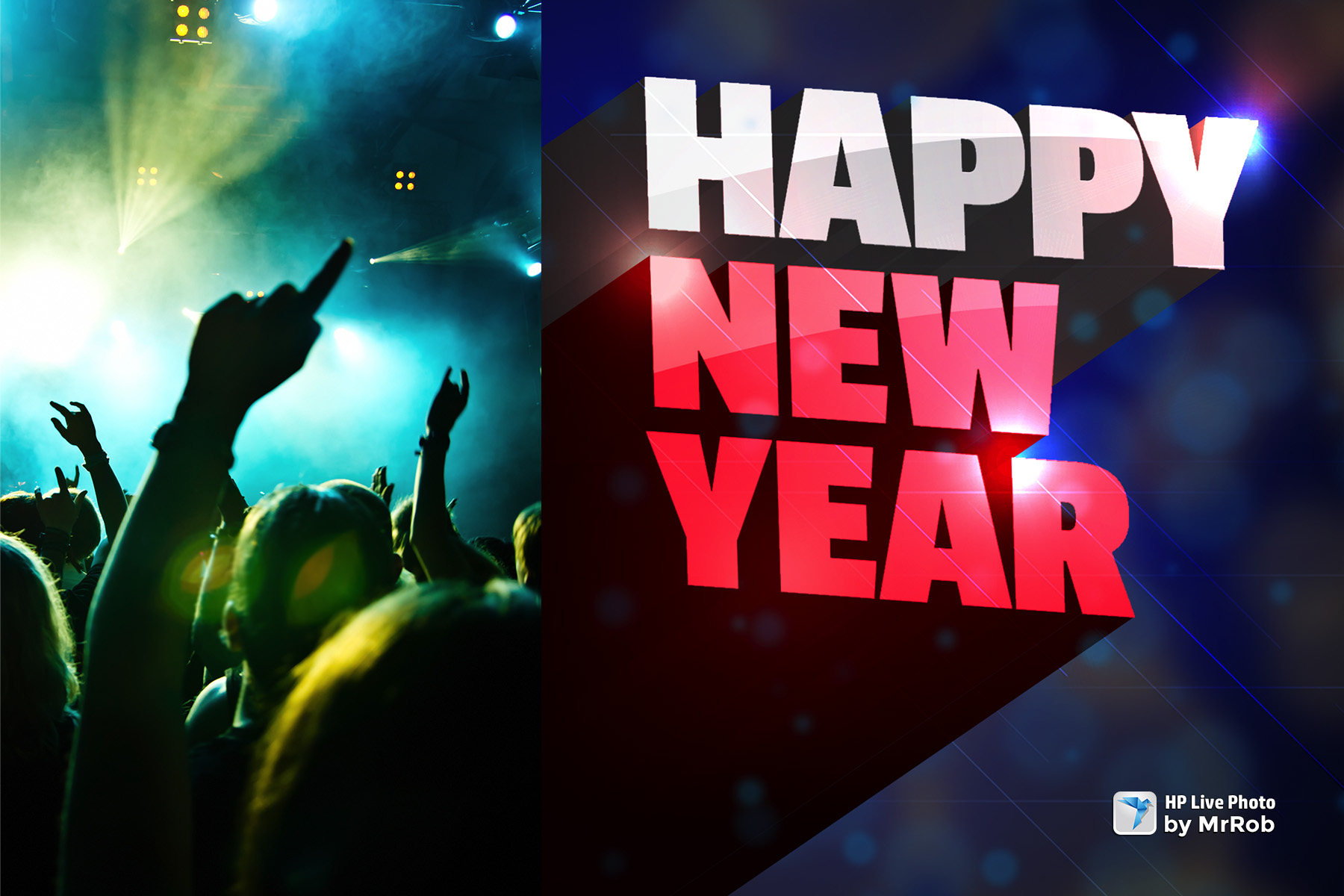 Our team created a number of sample templates internally and worked with external agencies to expand our library of designs.

In July of 2012, we launched the MVP of HP Live Photo on the Apple App Store where it quickly earned 4-star reviews. 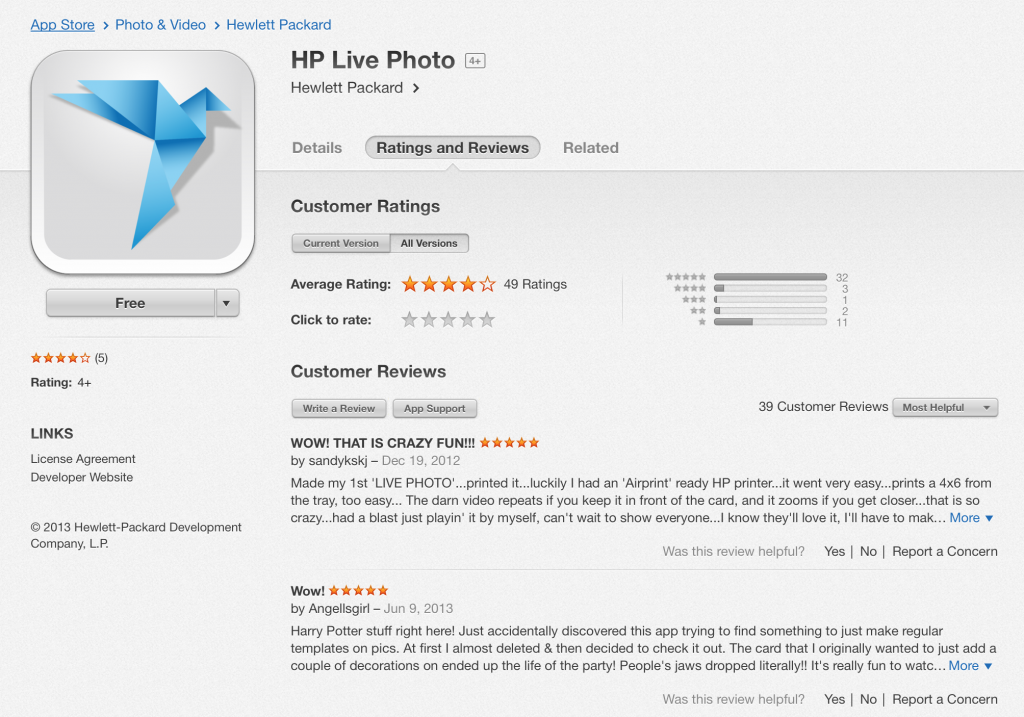 People compared our app to the magical newspapers in the movie Harry Potter!

We continued to iterate on and revise the application post-launch and worked with an HP team in Brazil to port the app over to the Android platform.

I had a wonderful time working on this product, which brought people back to their treasured memories using augmented reality. Our team believed that your memories shouldn’t be trapped on personal devices and accounts. Instead, they're meant to be rediscovered on your coffee table and walls.

Our team believed that your memories shouldn’t be trapped on personal devices and accounts. Instead, they're meant to be rediscovered on your coffee table and walls.
Thanks for taking a look! Please feel free to see my other projects or reach out to me about your project or company. I'd love to chat.
Email meLinkedIn