CMU / DESIGNER AND RESEARCHER / 2014
Brief is a concept designed to provide key patient information to help make informed critical decisions in the field.

The Emergency Medical Service (EMS) is a student managed volunteer organization at Carnegie Mellon University that works closely with the campus police dispatch to provide emergency medical services to students within the Carnegie Mellon University vicinity. Over the course of 4 weeks, I worked on a team with Christina Brant and Wang Liang to research the domain and design a concept for an information system that would fit the needs of the medical response teams.

We set up 7 different contextual interviews with police officers and EMS team members see how they handled emergency medical calls and find breakdowns in their process. During these interviews, we were able to listen in on recorded phone and radio communications and have team members describe the situations and problems in detail. 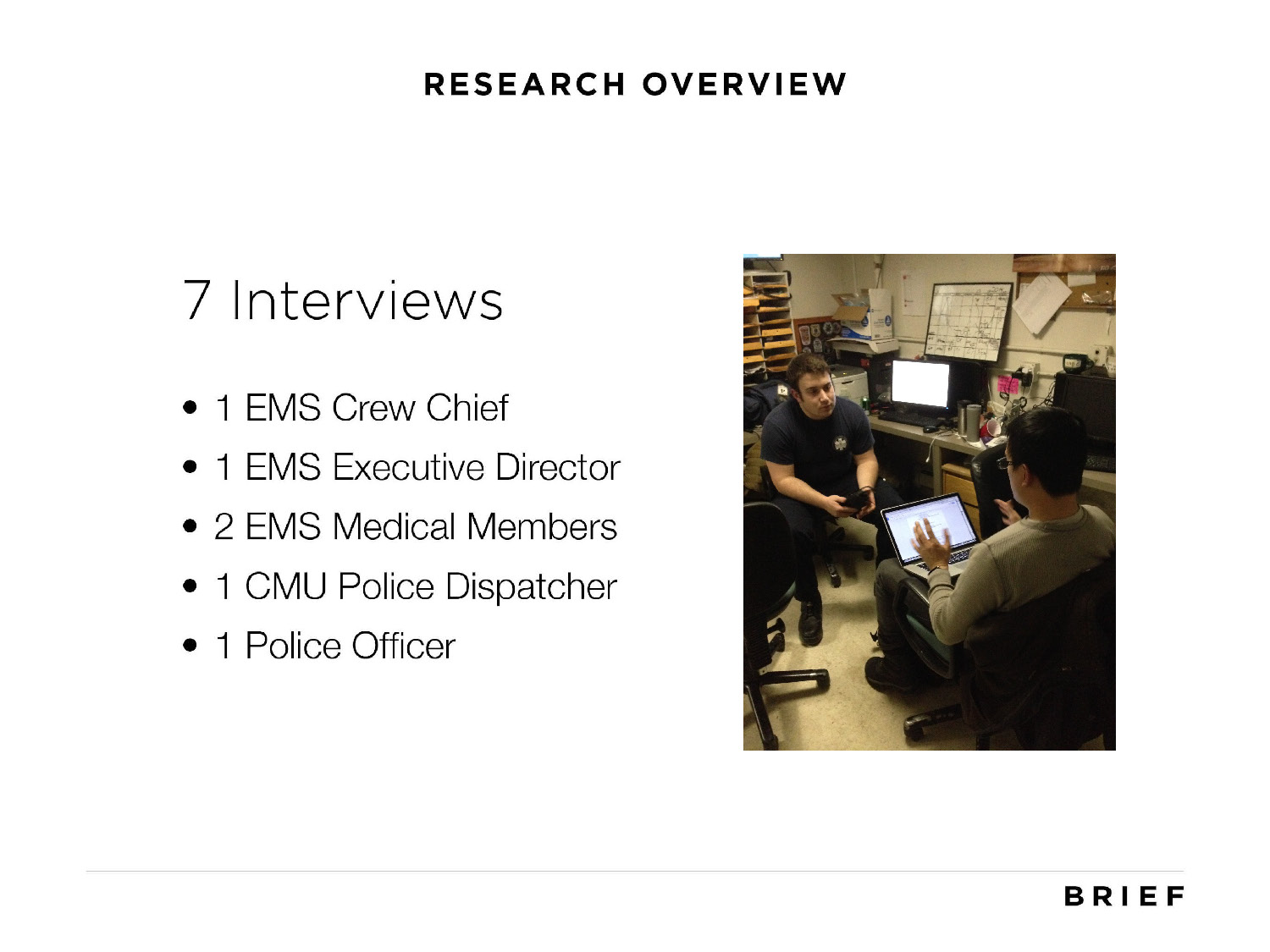 EMS teams consist of a Crew Chief and several Medical Members who are out in the field responding to calls.
Nearly all interagency communication occurred through the two-way radio, but confidential patient information had to be transmitted privately over phone or email. 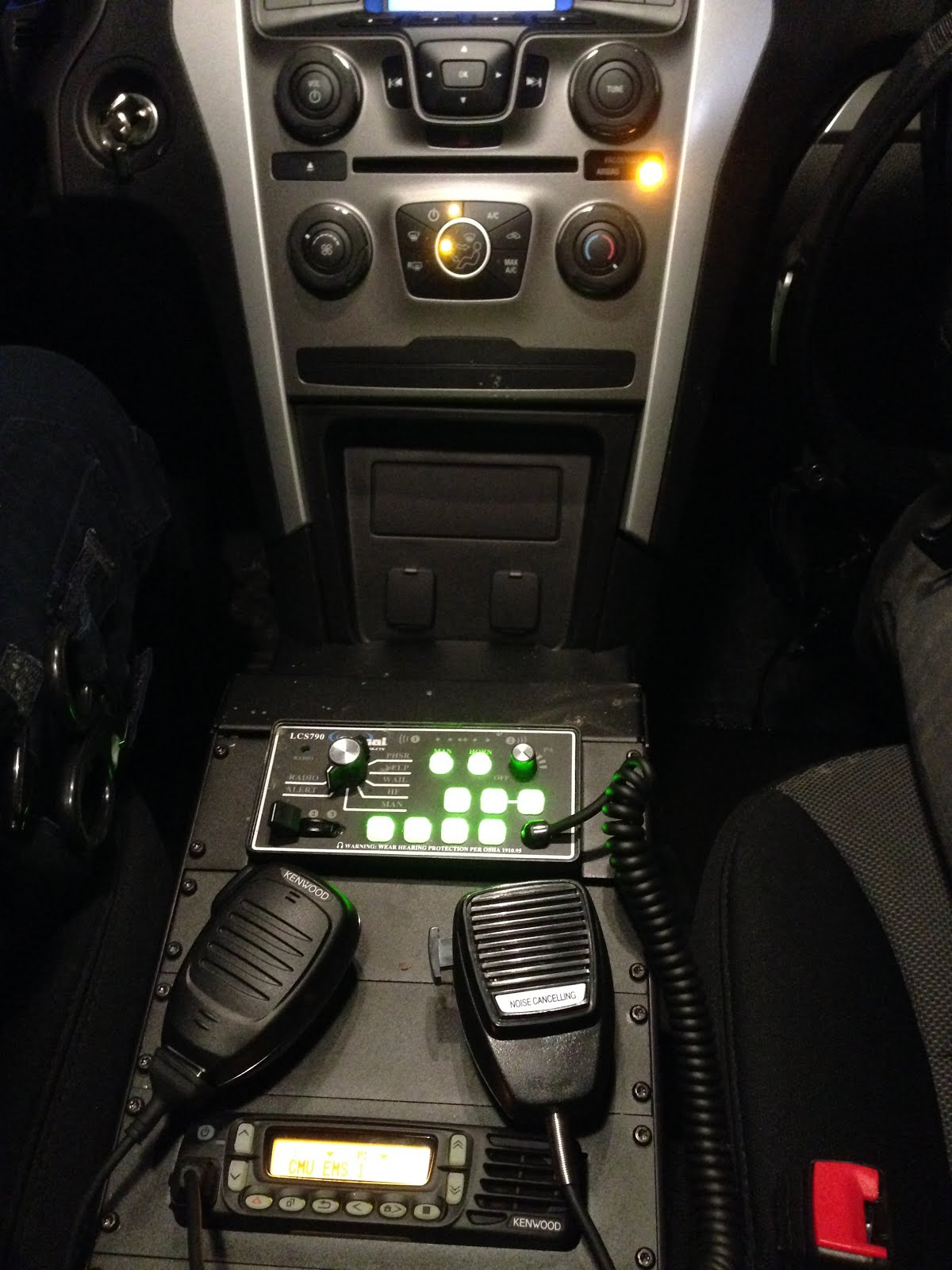 The radio is used as a primary form of communication between team members and other emergency response agencies.

The radio plays a key role in their communication workflow because it allows for hands-free access to information and multi-tasking. It is the standard protocol to use for communicating brief messages among team members and across agencies such as police dispatch and the city’s EMT service.

However, breakdowns occurred when dealing with situations that deviated from their standard communication protocol, such as relaying confidential information, transmitting long messages, or when the radio is overloaded with chatter.

Based on our interviews, we found that looking up patient information tended to be very time-critical, but required much more time than other tasks due to the need to request information, look it up, and send it back to the medical member in the field. The process became repetitive when consulting with an on call doctor.

We needed to find a way to provide medical members with a way of exchanging confidential information while minimizing cognitive load in high-stress situations. 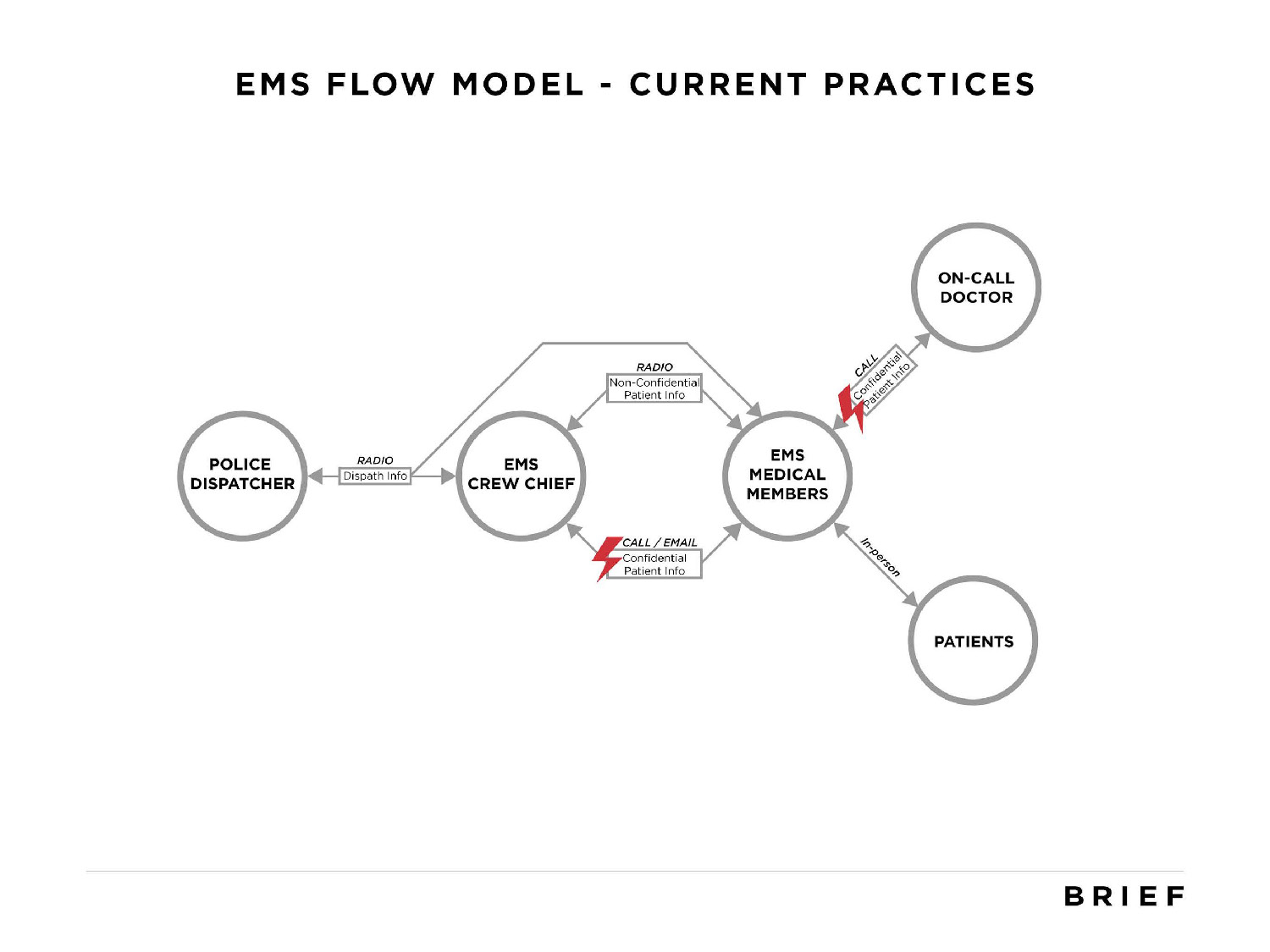 This flow model shows that transmitting patient information requires team members to switch to phone calls or emails, which also reduces the effectiveness of a hands-free radio.

We started by modeling personas based on our research. This helped us represent our user-base, empathize with them and focus on their needs as we generated concepts. 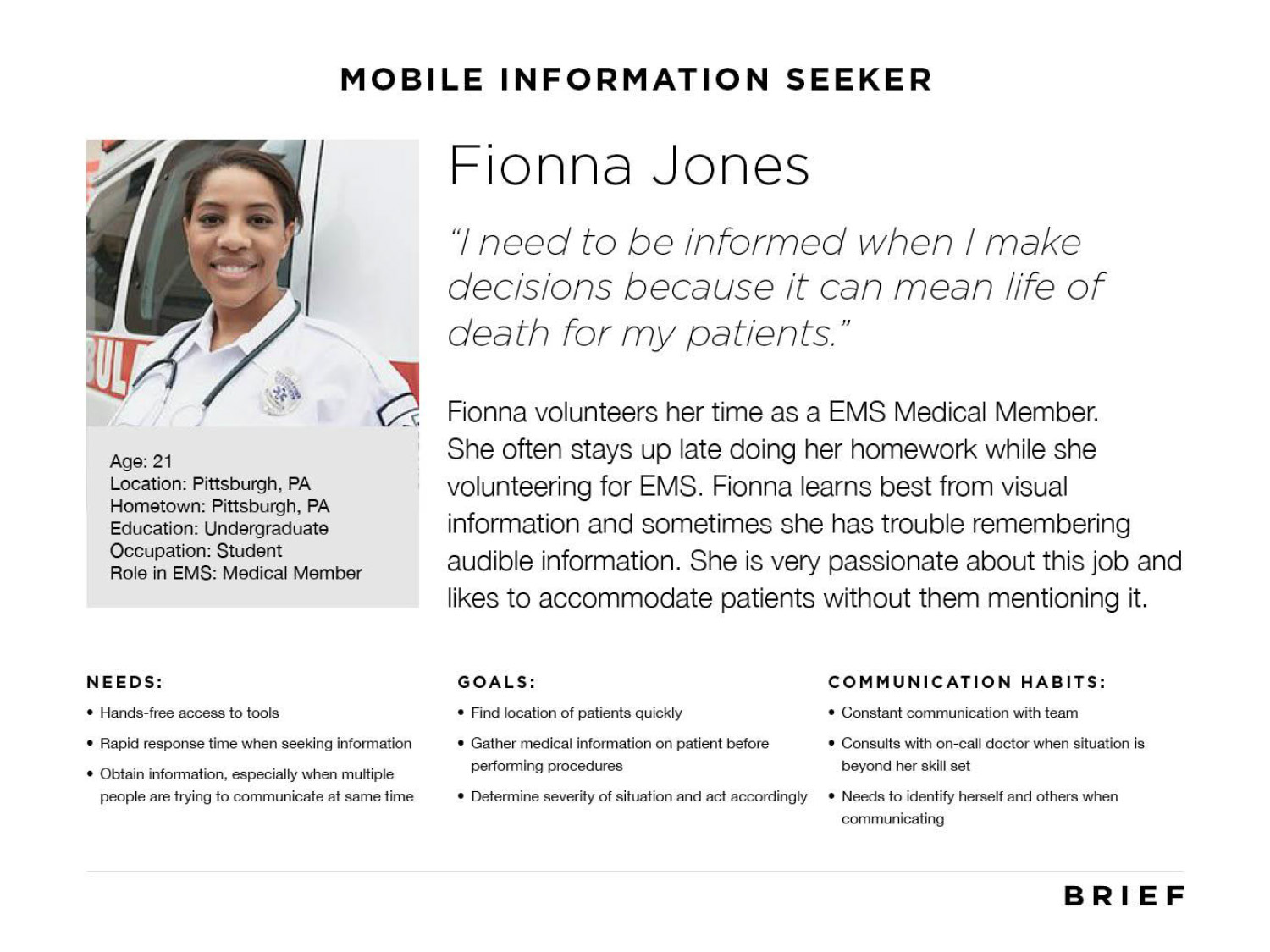 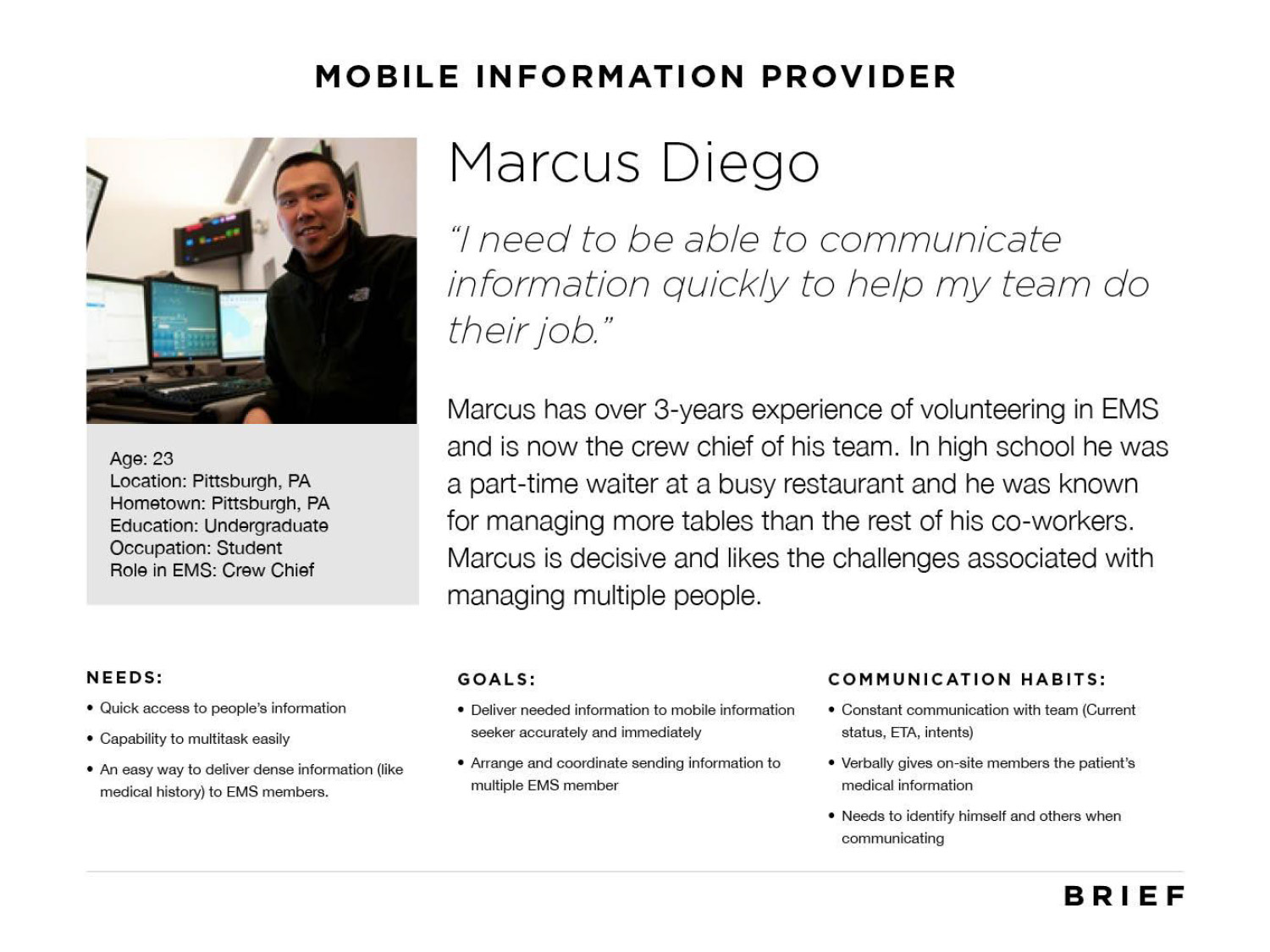 We decided to improve on their existing workflow of phone calls and emails by creating an app that was purpose-built to handle calls in cold weather and gloved hands. 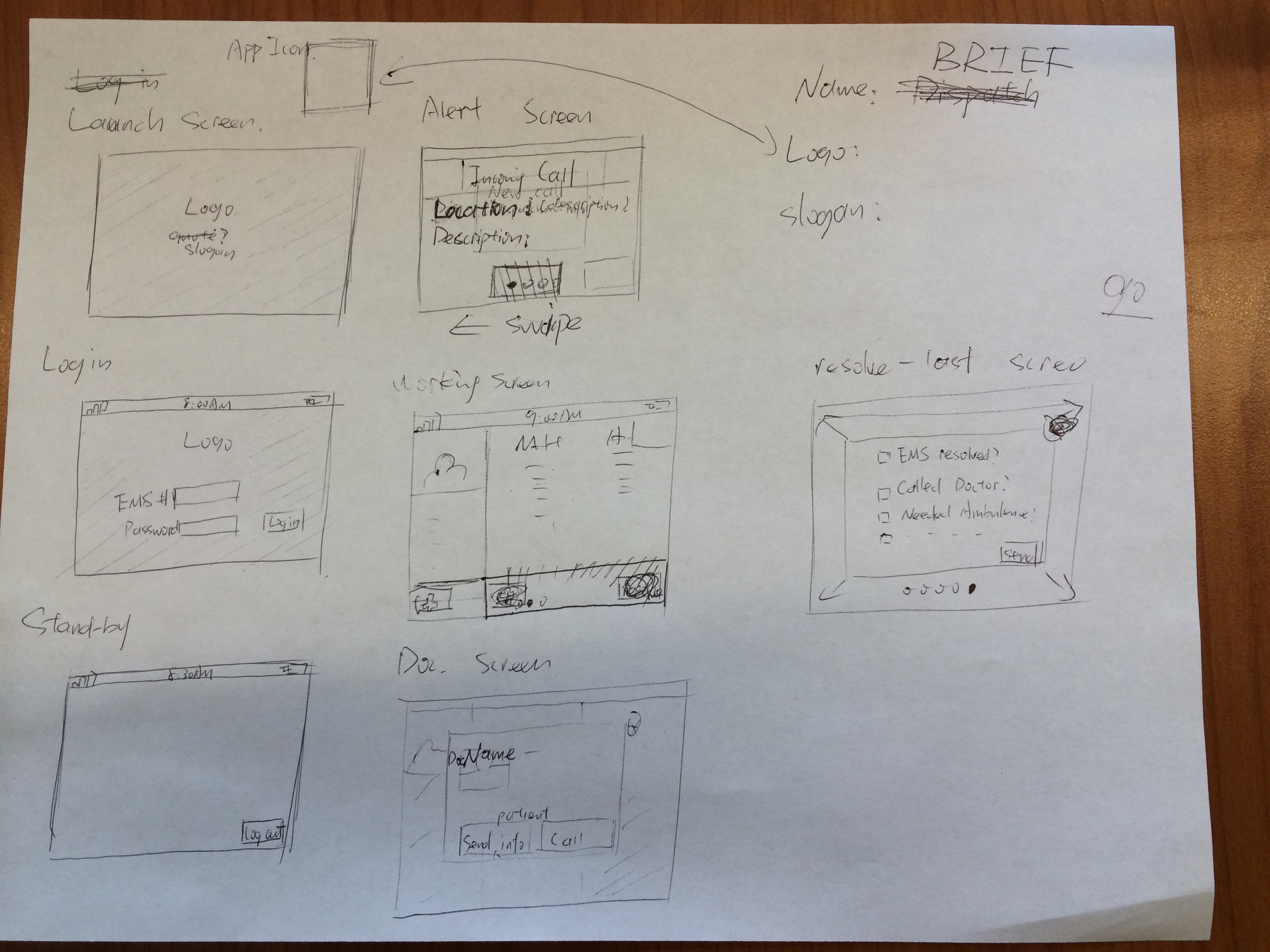 We pared down our system to concepts that could be realistically implemented—balancing potential cost, functionality, and usability. 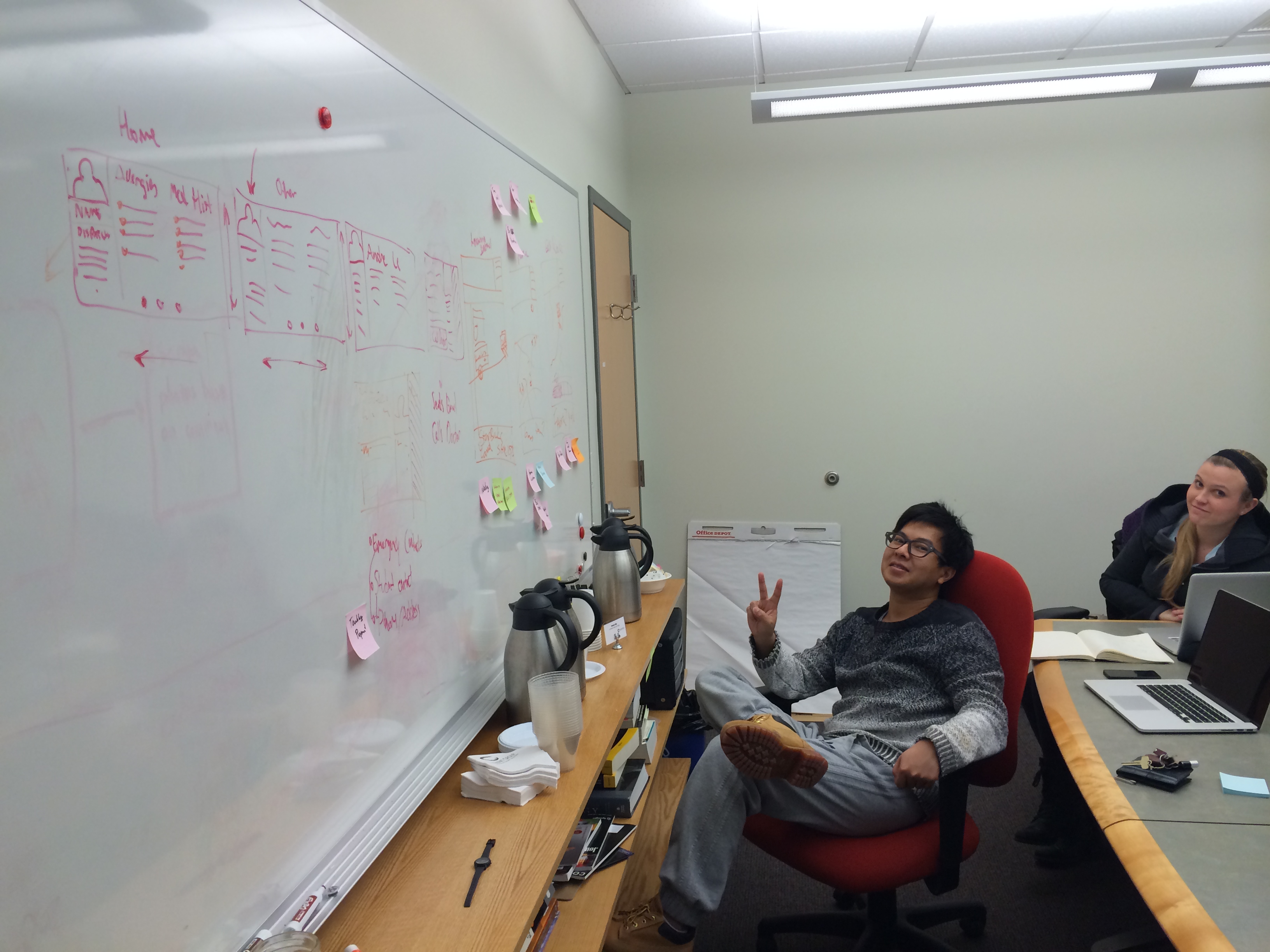 We designed Brief as a two-part solution. Medical members would use a velcro sleeve to turn their phone into a wearable device while in the field. An app runs on their phone and connects as a client to a dashboard managed by the Crew Chief. 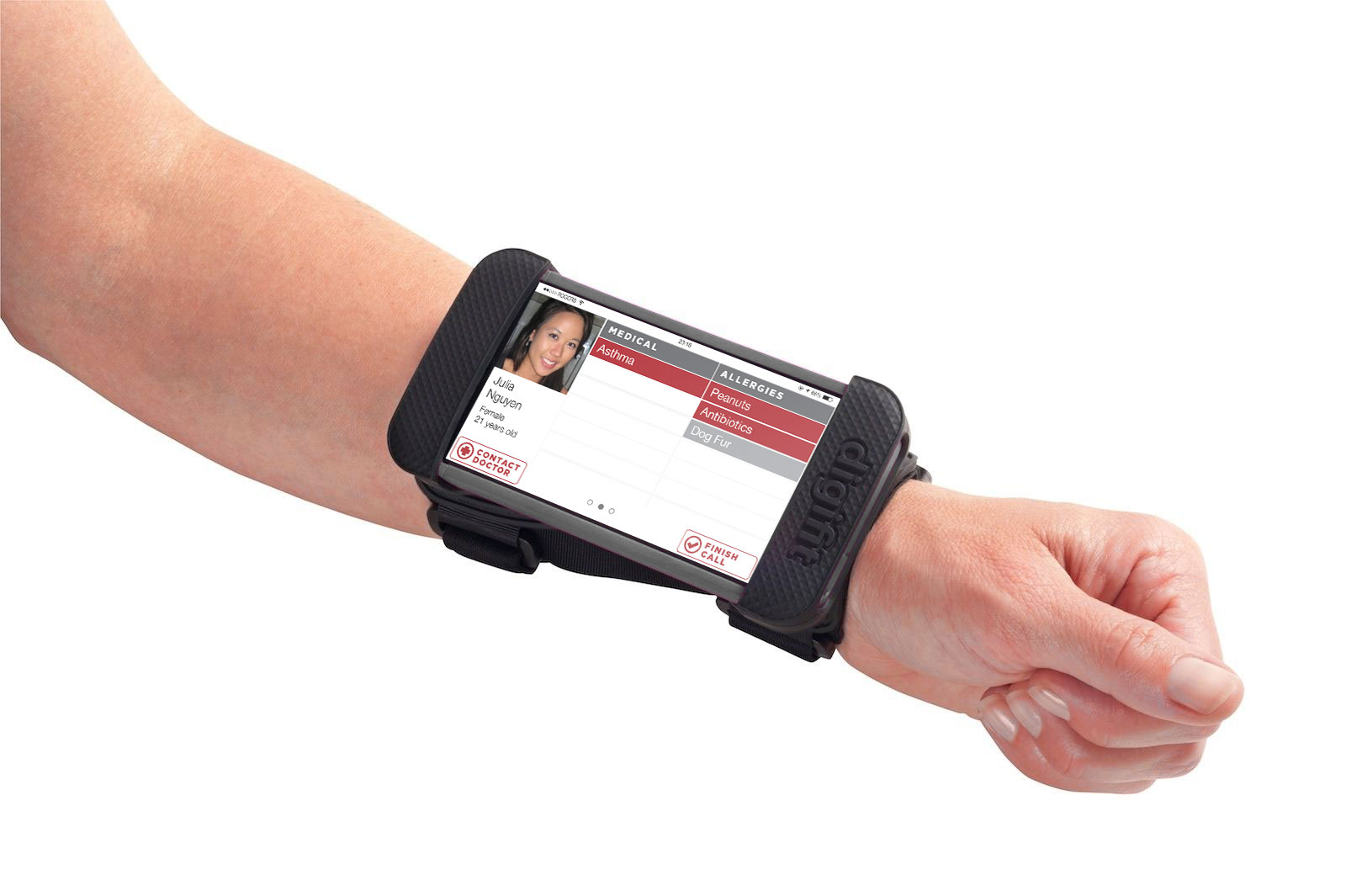 As calls would come in, the Crew Chief would dispatch the team through the dashboard and be able to push relevant information to them such as the original call information and student health records. If needed, calling a doctor and forwarding her patient information would just be a tap away. 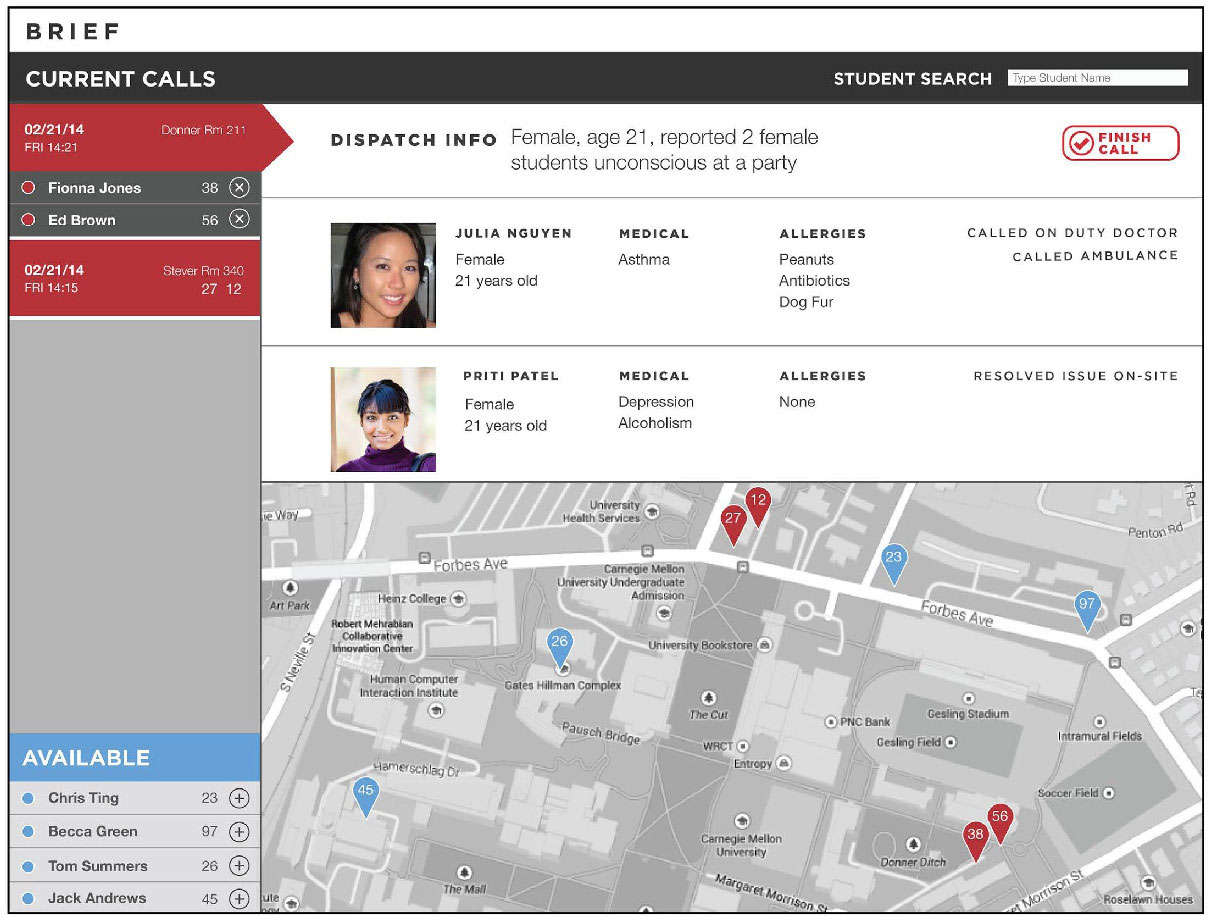 While Brief was a concept, the ideas here hint at a system that could reduce human error and open up a whole new line of communication that extends the capabilities of the age-old radio. By providing contextual information in a timely manner, this system coud possibly save lives.

The ideas here hint at a system that could reduce human error and open up a whole new line of communication that extends the capabilities of the age-old radio.

The following depicts a potential situation in which Brief would be able to make an impact on a medical member’s duties. 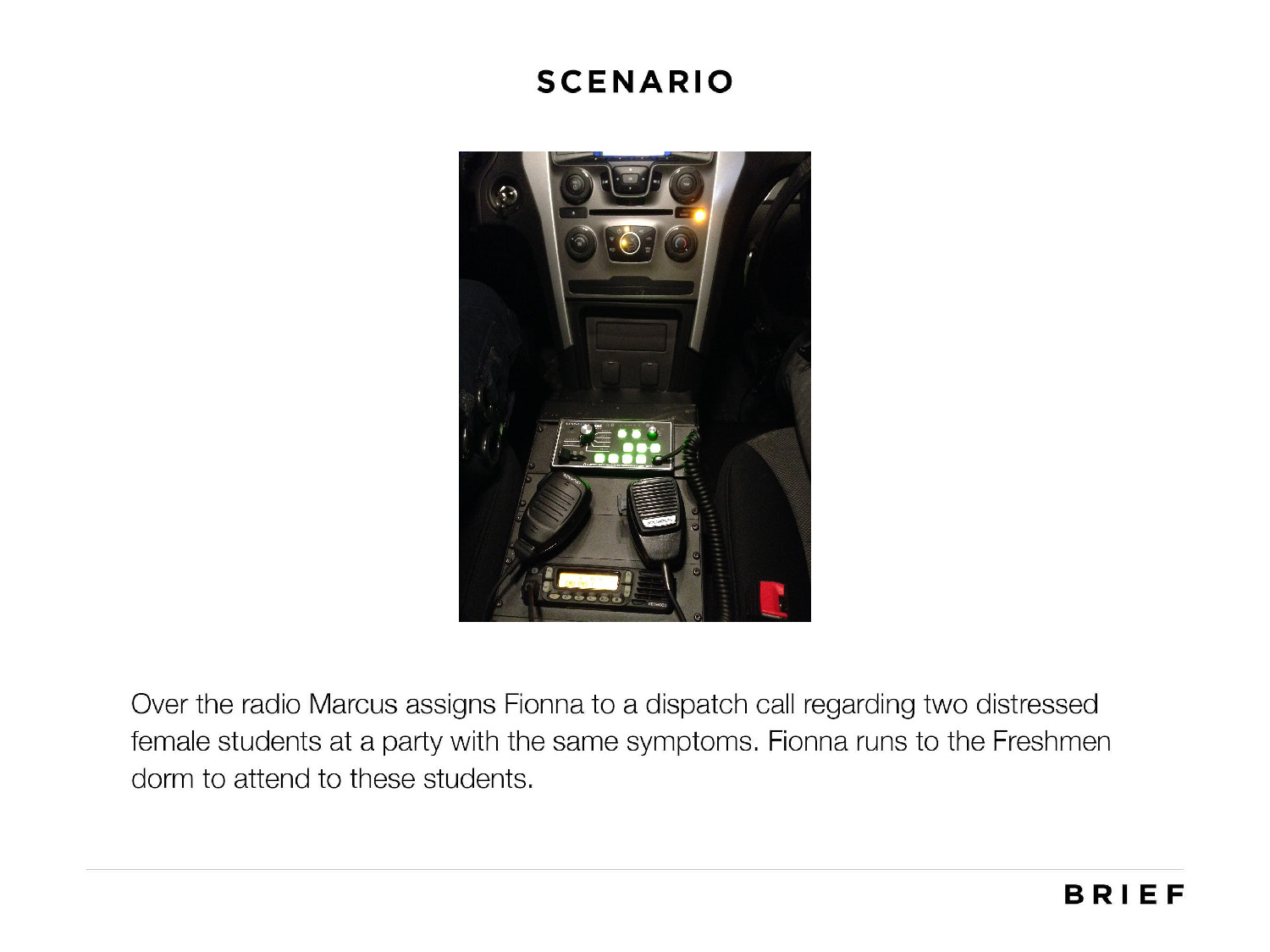 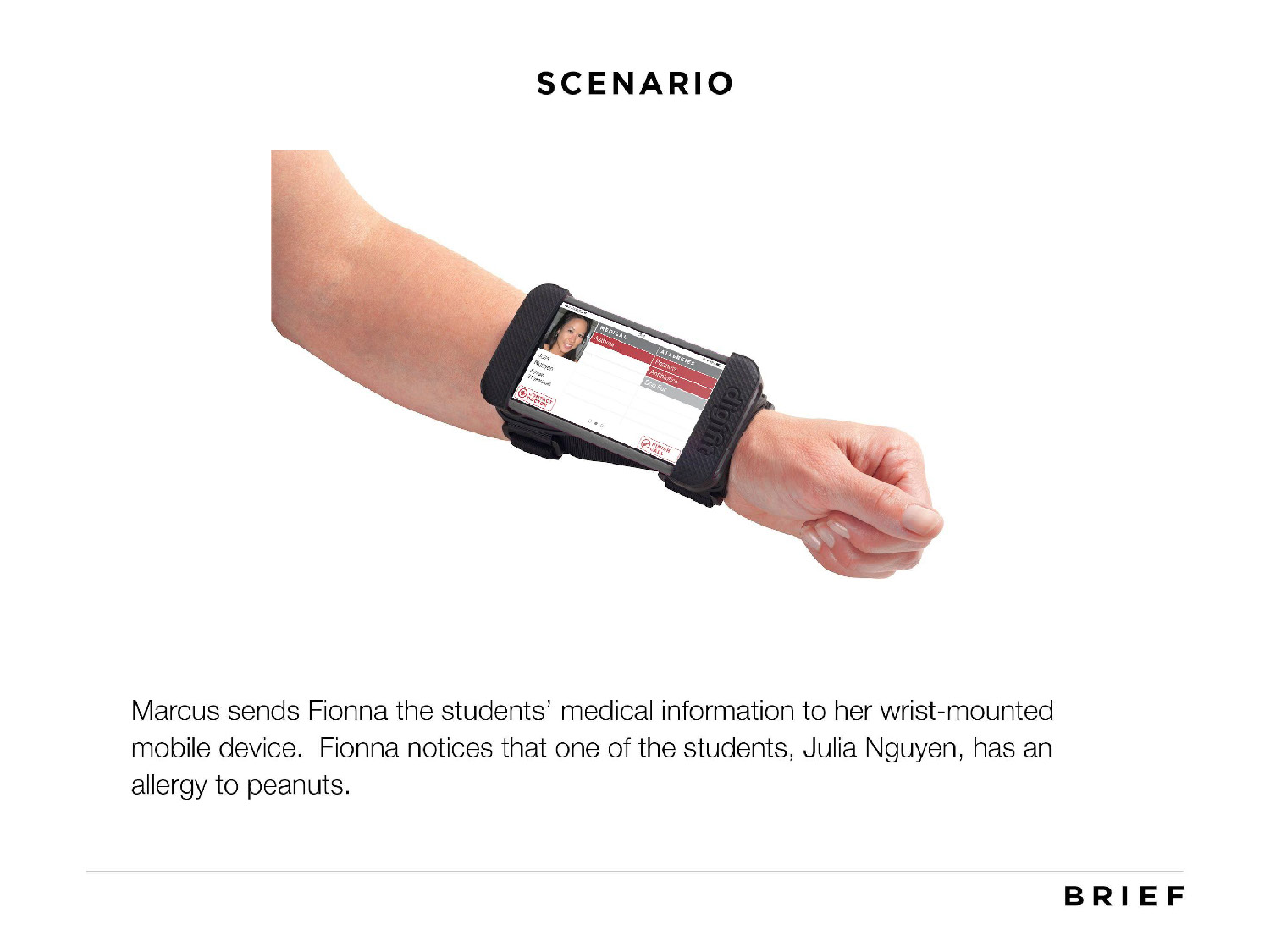 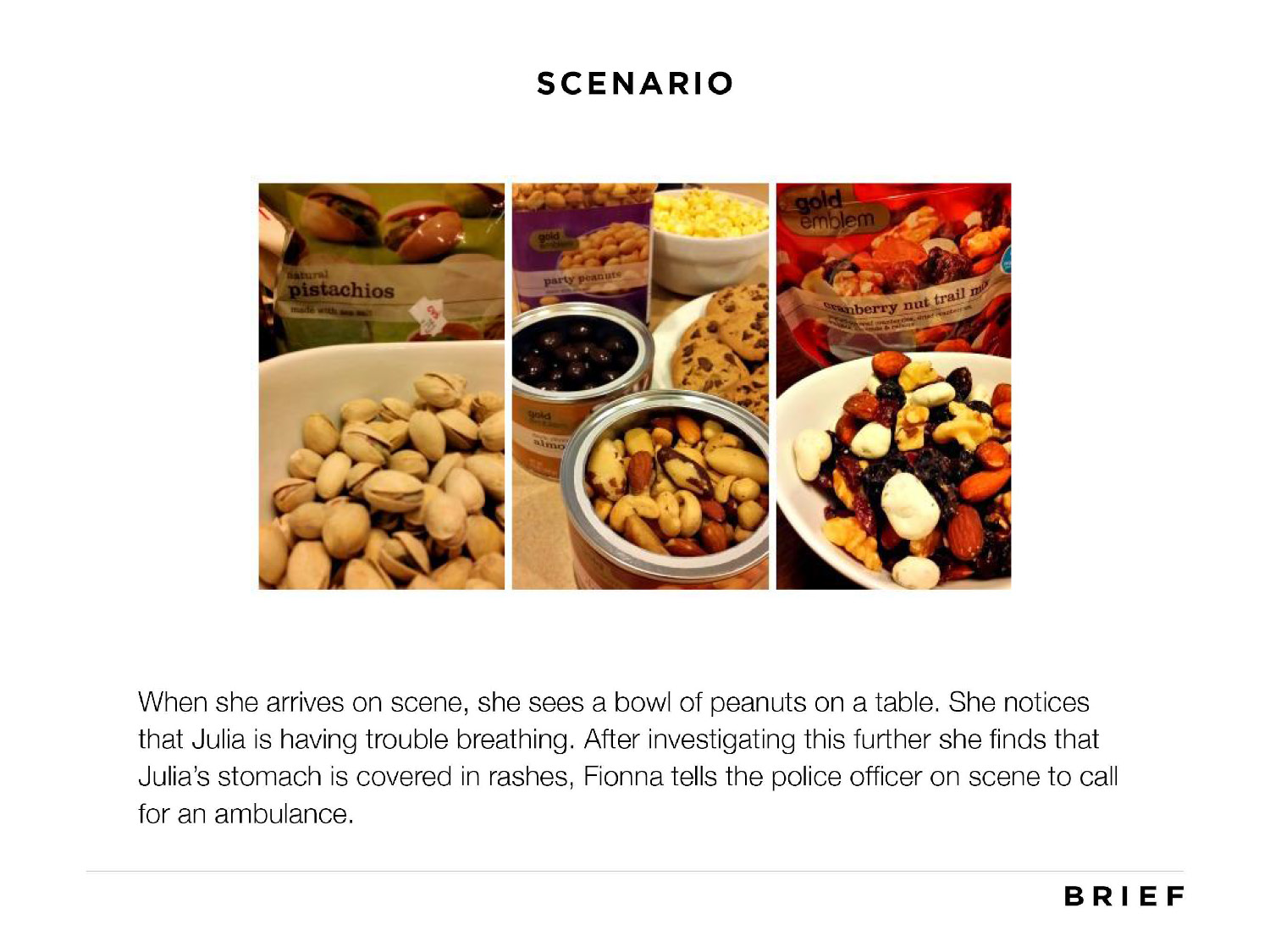 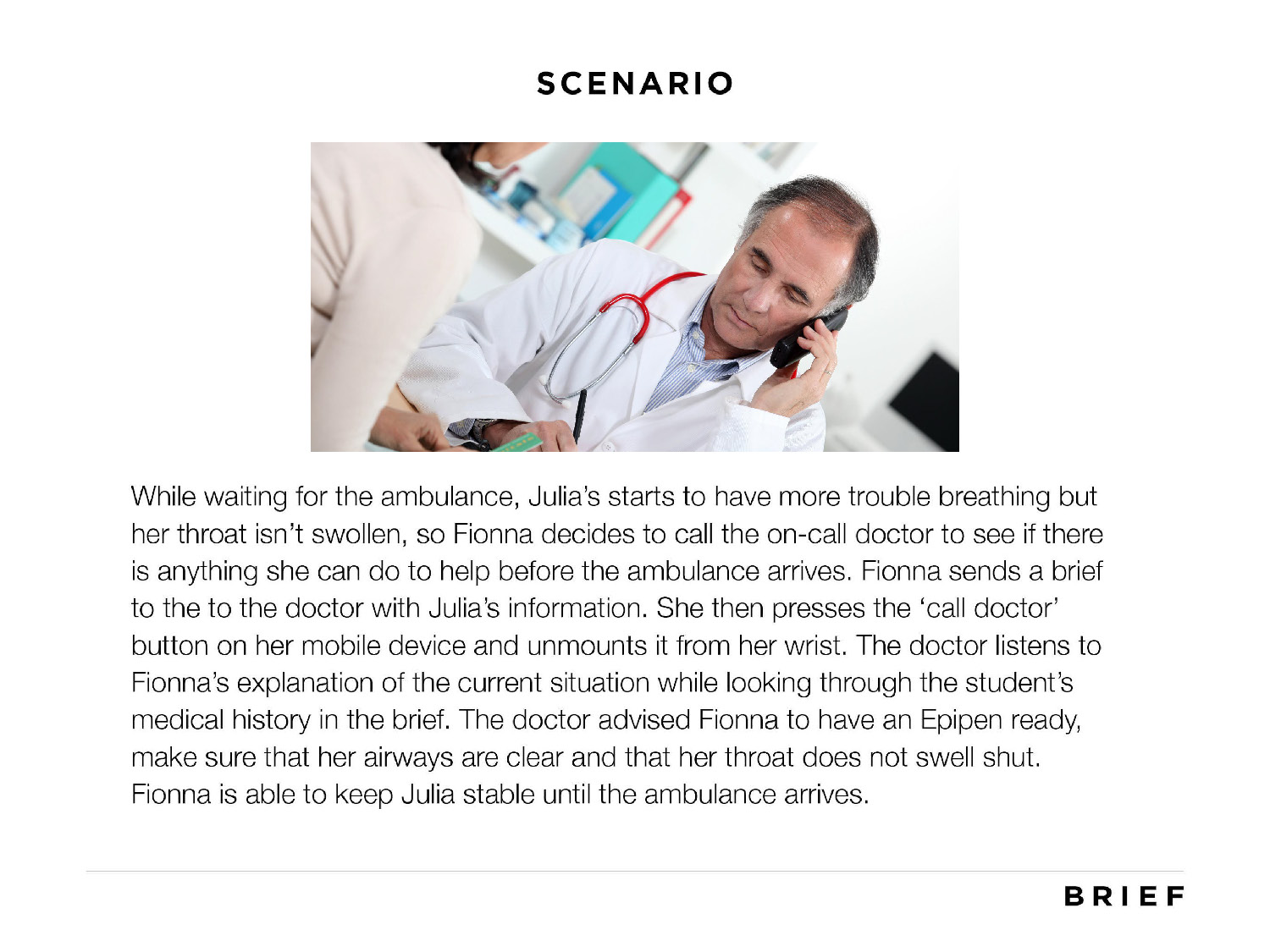