In 2014, our team of Carnegie Mellon Human-Computer Interaction masters students partnered with Bloomberg for an 8 month capstone project to reimagine the transparent calendar.

Bloomberg is a leader in global business and financial information with over 15,000 employees. They embrace a culture of transparency, which is evident in their glass-walled conference rooms to the ability to look up anyone’s calendar to see what they will be doing. This often meant that people used it a primary communication tool—resorting to the calendar for answers before bothering someone.

While Bloomberg had a mobile product for their customers to view stock information, they lacked mobile workflow and scheduling tools for their employees to look up others' calendars and book rooms away from their desks.

We set out to design the next-generation of mobile scheduling systems for tailored to Bloomberg’s culture.

Working out of Pittsburgh, PA, we made five trips to Bloomberg’s headquarters in New York to receive training on the terminal, speak with employees, learn about the culture, and define their needs. 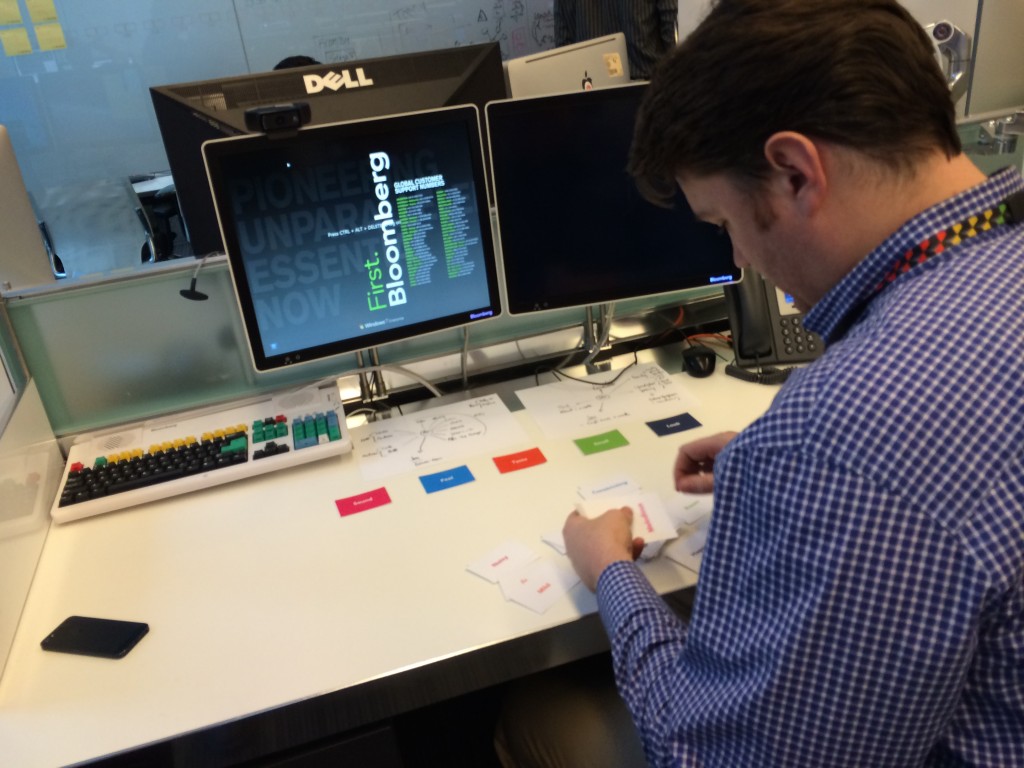 We spent 5 months in our research phase gathering information from literature reviews, competitive analyses, contextual inquiries, and subject matter expert interviews. We also developed our own qualitative research method called Sensory Association to gather deeper insights on breakdowns and feelings about the calendar.

While we set out to reimagine the calendar, we found that people were using the calendar in conjunction with other internal applications (called functions) to gather information and achieve the following goals:

We modeled our observations using affinity diagrams and tensions maps to synthesize our findings and generate visions that led to the eventual design of Bloomberg Connect. 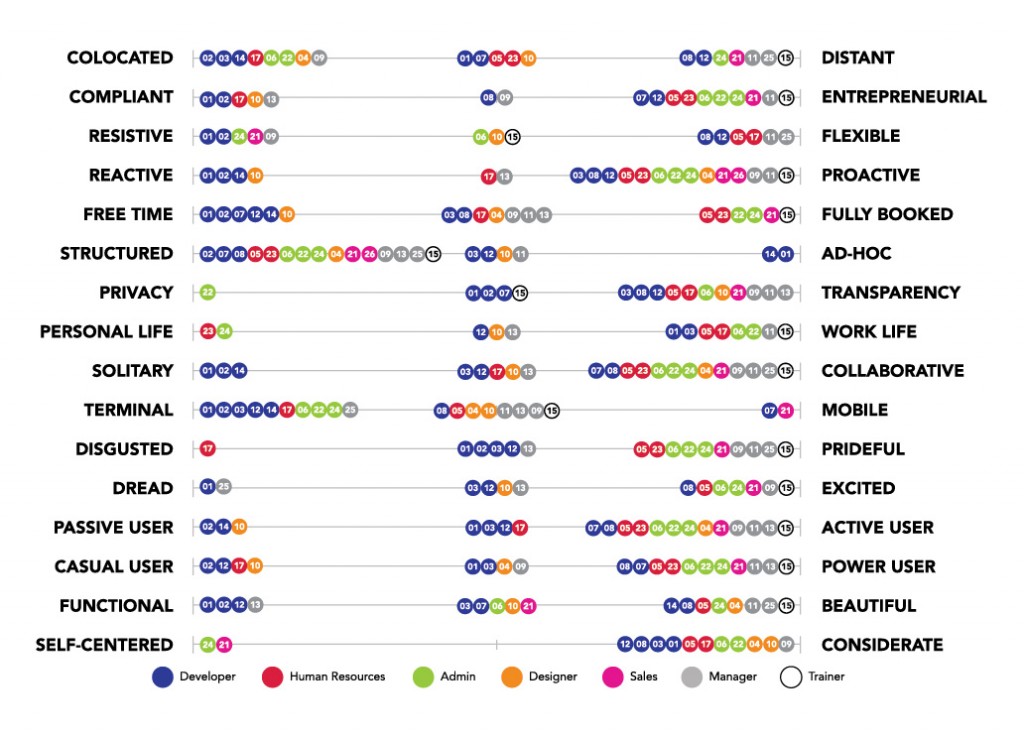 This tension map gave us a high-level overview of the unique need patterns for various roles at the company.

The workday is not black and white. It consists of much more than the calendar's free, busy, and tentative options.

We saw people put fake meetings on the calendar in order to have time to do work, track their coworkers down to ask about their availability, and roam the building for up to 15 minutes searching for empty meeting rooms – all of which were the result of or contributed to their distrust in the system.

Our findings pointed to the fact that while the transparent culture was beneficial in giving people a way to be proactive, inaccurate information and difficult tasks led to a lack of trust in the system. This distrust meant that people were not using the “smart” tools available and putting more work on themselves to do manually, which introduced human errors.

In the last 3 months of our project, we took our findings and created over 100 ideas to solve the problems that we observed. We consolidated them into 15 storyboards and used a research method called speed dating with 15 employees and interns to quickly validate and iterate on our concepts. Our concepts were also designed to push the boundaries in order to gauge the comfort level of Bloomberg employees. 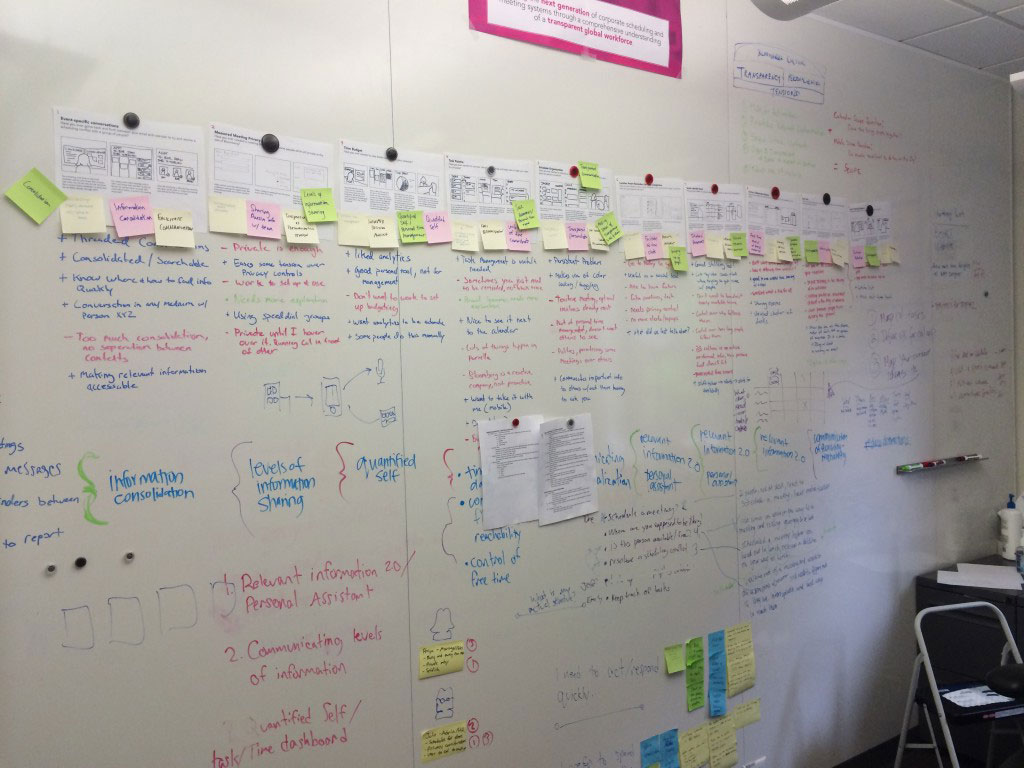 We prototyped a wide range of ideas utilizing an array of technology and behavioral cues. We then performed speed dating exercises to quickly get a sense of what would and wouldn't work with Bloomberg's culture

Our testing showed that it would be difficult to create change that went against Bloomberg’s culture of needing to be always available and transparent. We needed to find a way to embrace their culture as well as build trust.

From our speed dating sessions, we discovered prominent themes which we filtered into 4 design principles to guide our future decisions. 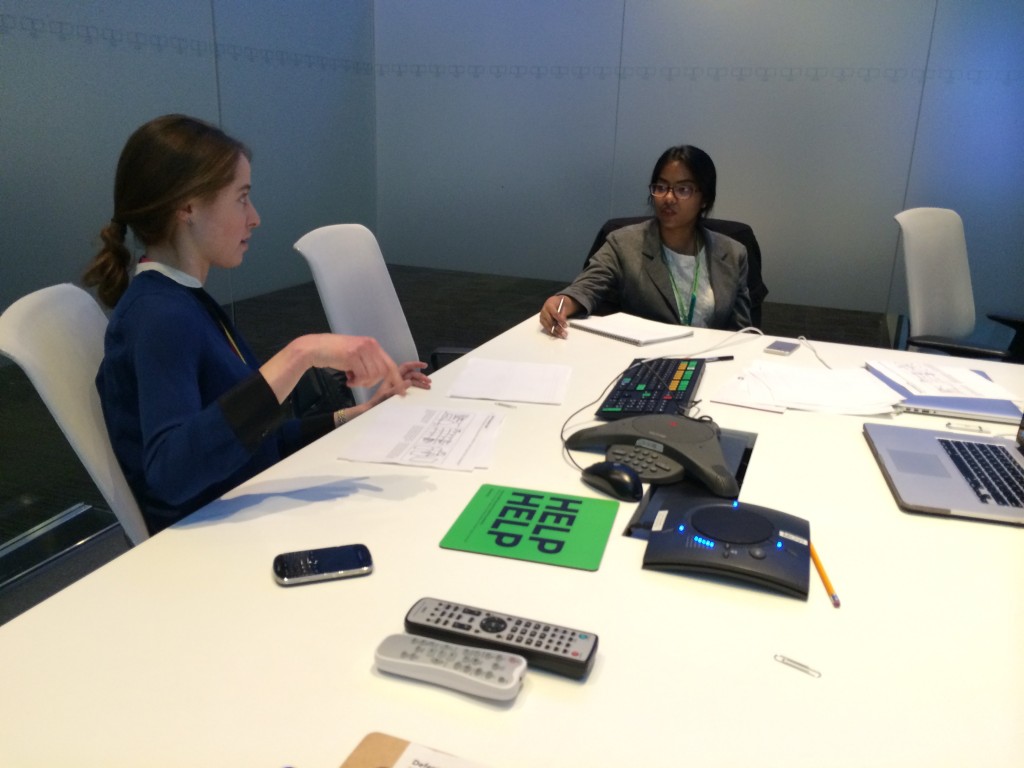 We designed Bloomberg Connect not only as a tool to keep track of meetings and book time, but also as social platform to keep up-to-date with their co-workers. 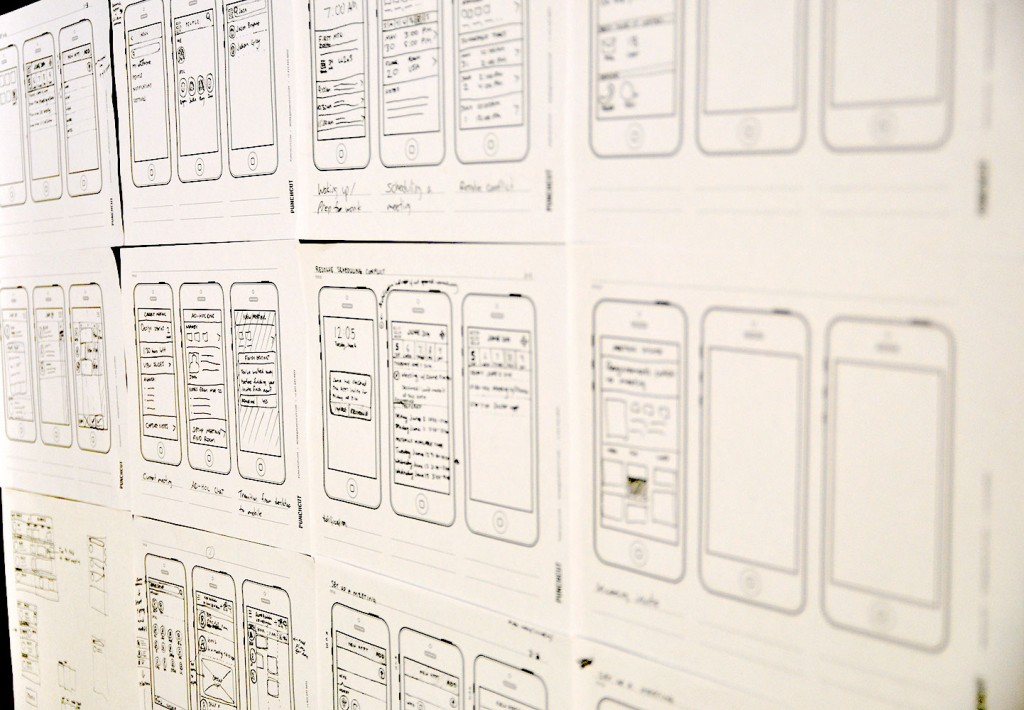 We iterated on our designs through 5 prototyping and testing cycles from a low fidelity paper prototype, 3 mid fidelity interactive Axure prorotypes, to a high fidelity Axure prototype. 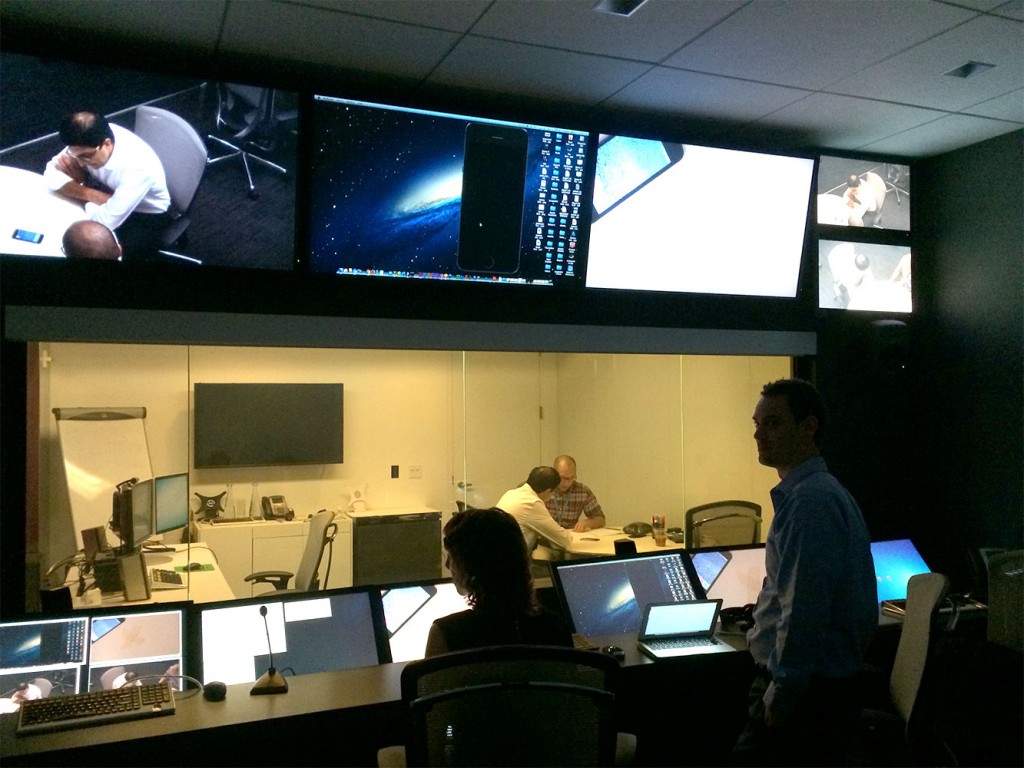 Between each prototype, we performed usability testing with 5 participants using the think aloud protocol to fine tune our features and maximize our limited screen real-estate.

The final visual design and app branding was inspired by modern calendar applications such as Fantastical and Sunrise while still adhering to the familiar iOS8 design guidelines. The color scheme was inspired by Bloomberg's terminal color, but set on a light and friendly background to enhance in mobile contexts.

The home screen was a dashboard that provided quick and actionable access to upcoming meetings, free time, and team members. It even lets you know if someone is going to be running late. 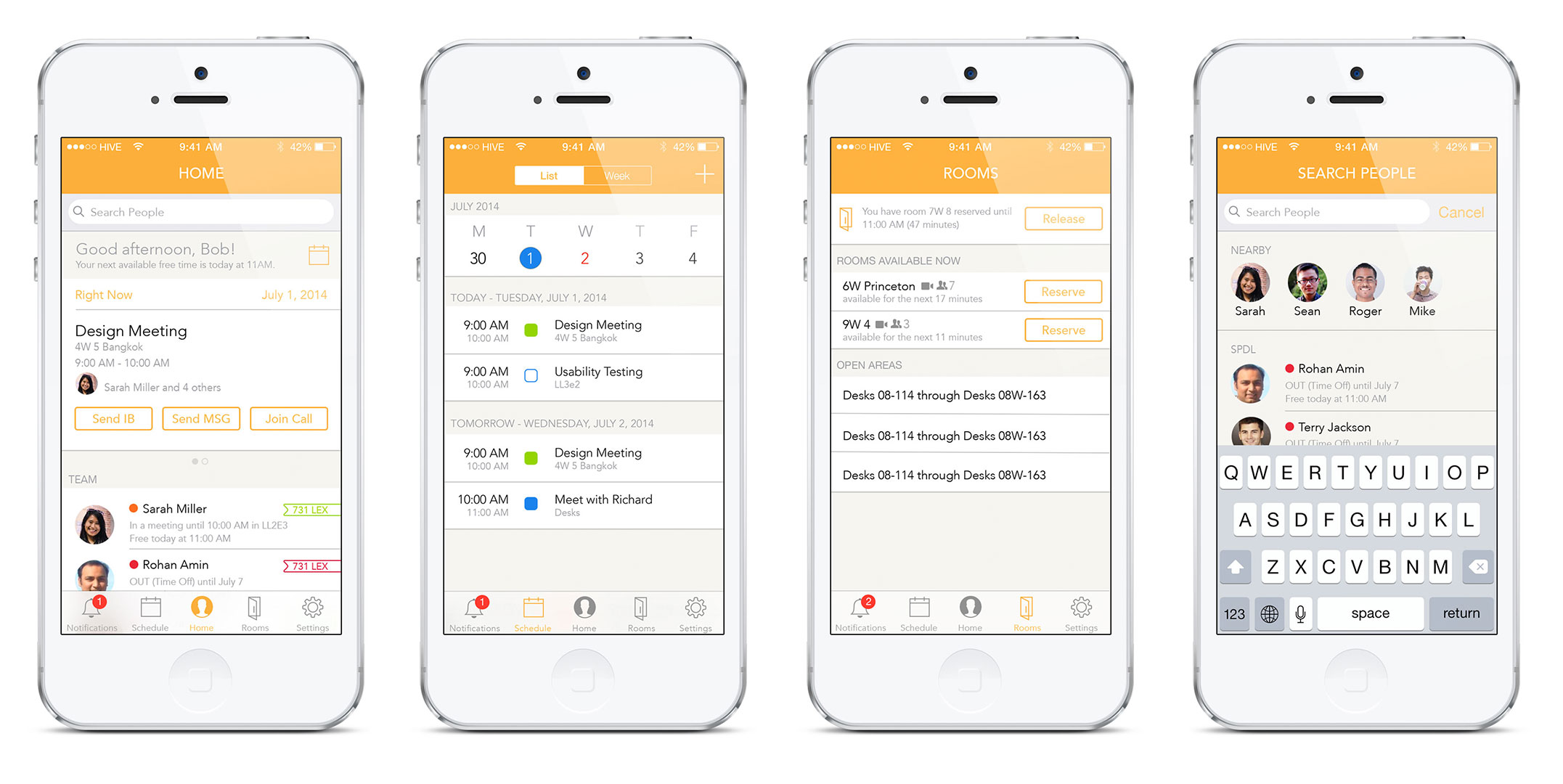 The bright goldenrod color scheme was a nod to Bloomberg's existing Terminal branding but high contrast enough to be readable while out and about in the mobile context.

The search pane allowed you to quickly book a meeting with someone right next to you, or see the next time a co-worker would be free at a glance. 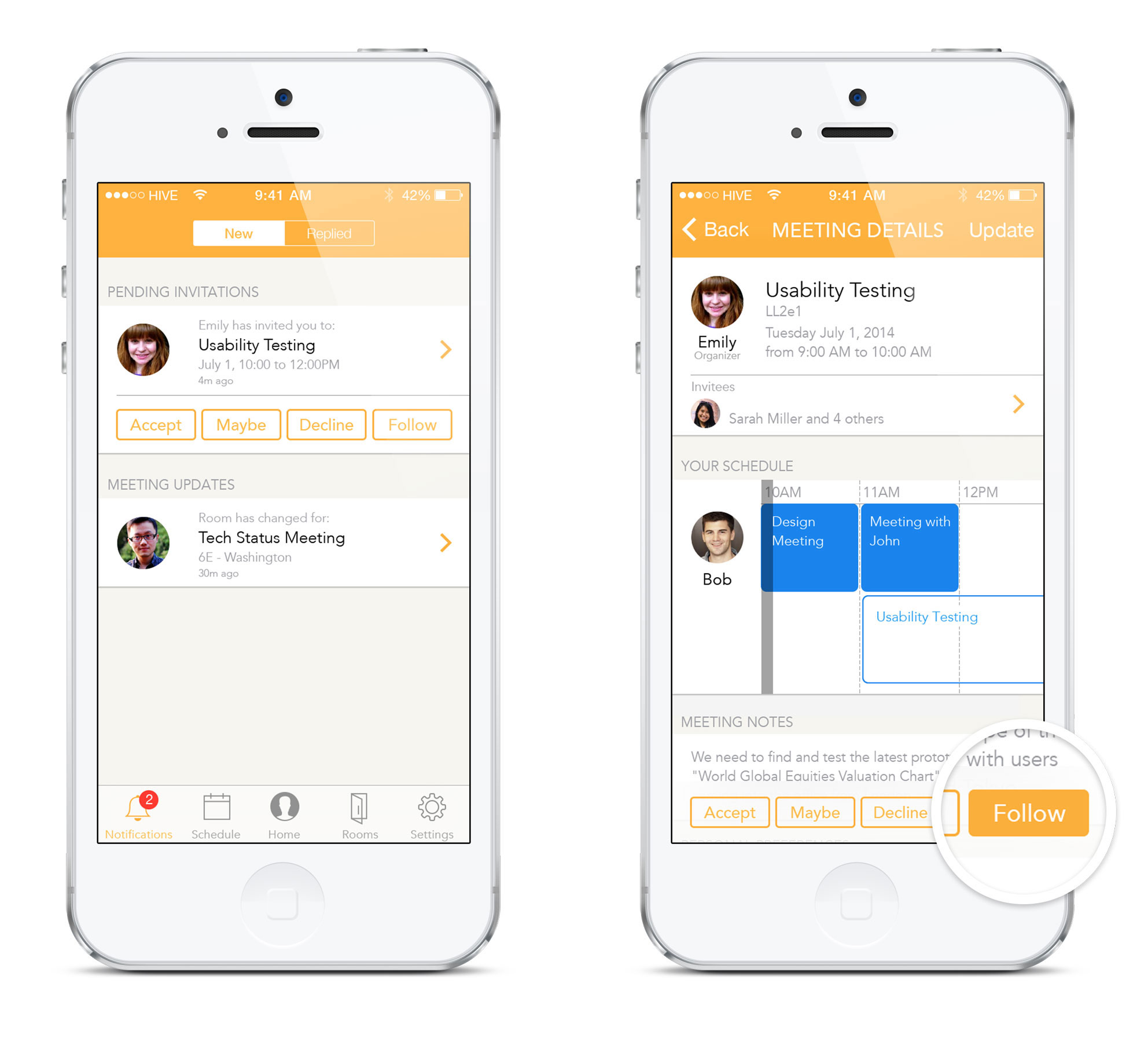 Left: The notification screen kept all meeting updates and invitations out of your inbox and in one place.
Right: "Follow" was a subtle but impactful change to the calendar that allowed people to subscribe to event updates without appearing to be busy to co-workers.

Looking for a meeting room? Quickly book remaining unused time in nearby rooms or release a room for others to use if your meeting ended early.

Our research and design efforts were incredibly well received by the Bloomberg staff. We presented Bloomberg Connect to a packed auditorium of executives, designers, and engineers who all felt that our findings resonated with the team. Bloomberg has since published a video highlighting our UX design/research workflow and its value to their company.

Interested in seeing more? Visit the Bloomberg Connect product page for a breakdown of each feature.