DESIGN CONCEPT / DESIGNER AND PROTOTYPER / SEP 2016
Airbnb VR is an exploration into how 360 photos and real-time collaboration could reduce friction in collaborative decision-making. 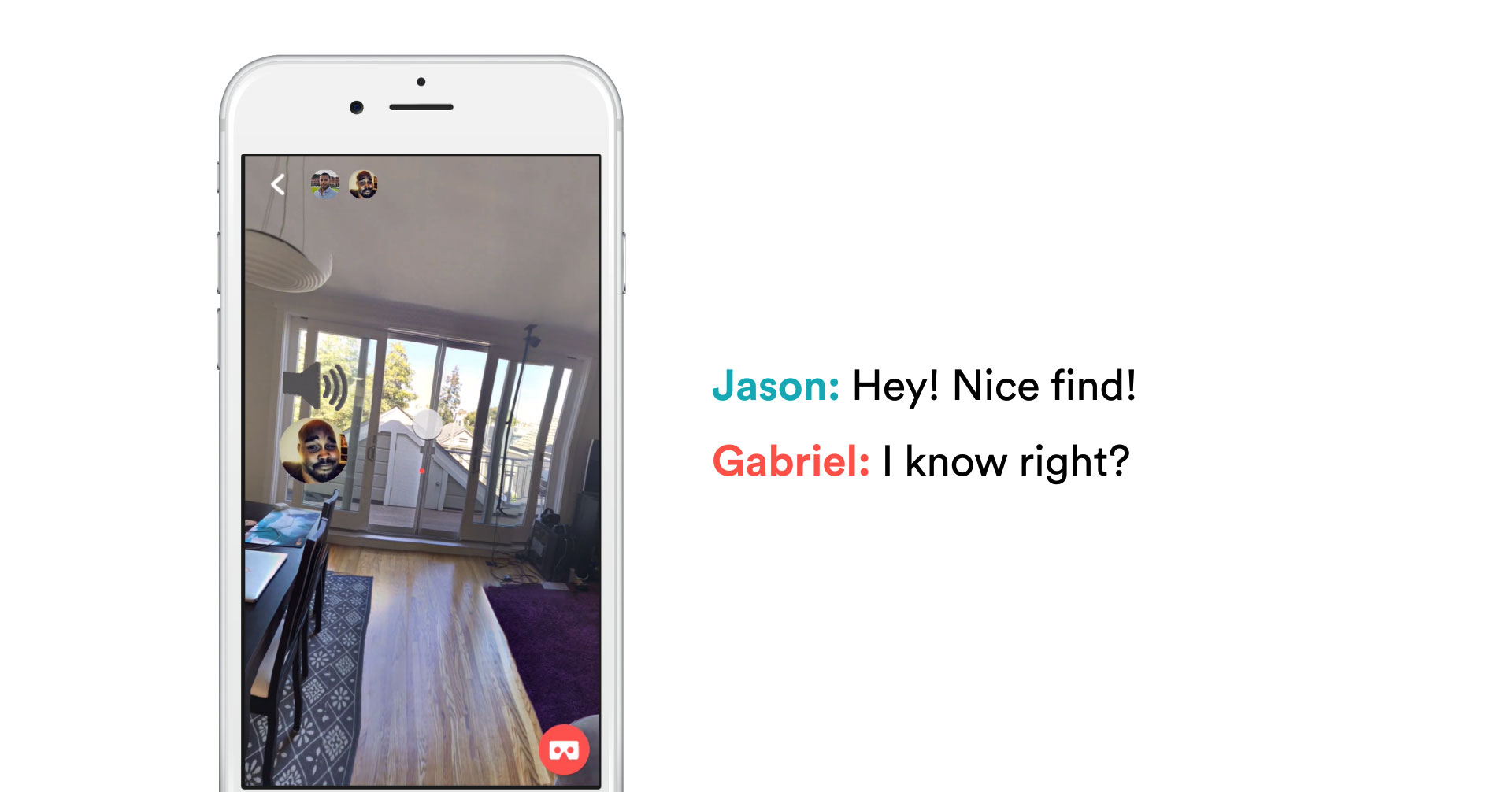 Have you ever tried making travel plans or a large group purchase with friends or family? Getting a group of people to agree on something can be really tough. Especially when it involves lots of money and time on everyone's part.

Take Airbnb for example. It's a platform that allows people to list and book time in other people's private homes. Some listings are meant for a single occupant, but you can just as easily rent out an entire ski cabin for your group of friends.

For group bookings, this usually means one person is tasked with gathering everyone's preferences, compiling a list of options, and hopping on one (or more) calls and video chats to coordinate. Let's also hope that everyone can stay focused and not get sucked into other distractions on the web.

One way to coordinate plans with a group is to form an email thread or message group to discuss. It's great for situations where people are all disciplined enough to keep up-to-date with ideas and suggestions, but topics can easily be derailed and messages buried.

Another way is to hop on a real-time messaging solution like a phone call or video chat. There, someone can share their screen and provide a guided tour to a captive audience. However, this means that people only see what one person shows them, and if another person decides they want to linger on certain photos or details, they're taking up everyone's time.

I've been in both situations while planning getaways with friends, and I felt that everyone lacked the agency to act and explore places on their own, while still staying focused on the task at hand.

Drawing inspiration from video games, I wanted to see how an experience could leverage VR's immersion and engagement within a real-time collaborative virtual space to quickly come to a decision on a listing.

I wanted to make this as easy and familiar to people as possible. I decided to tie into Airbnb's existing share mechanics. Sharing links to friends would generate a unique URL that would open up a web browser or the Airbnb mobile app where they could see and voice chat with their friends. This could be also be extended to the Wishlist, a group of favorited listings to share with your friends. 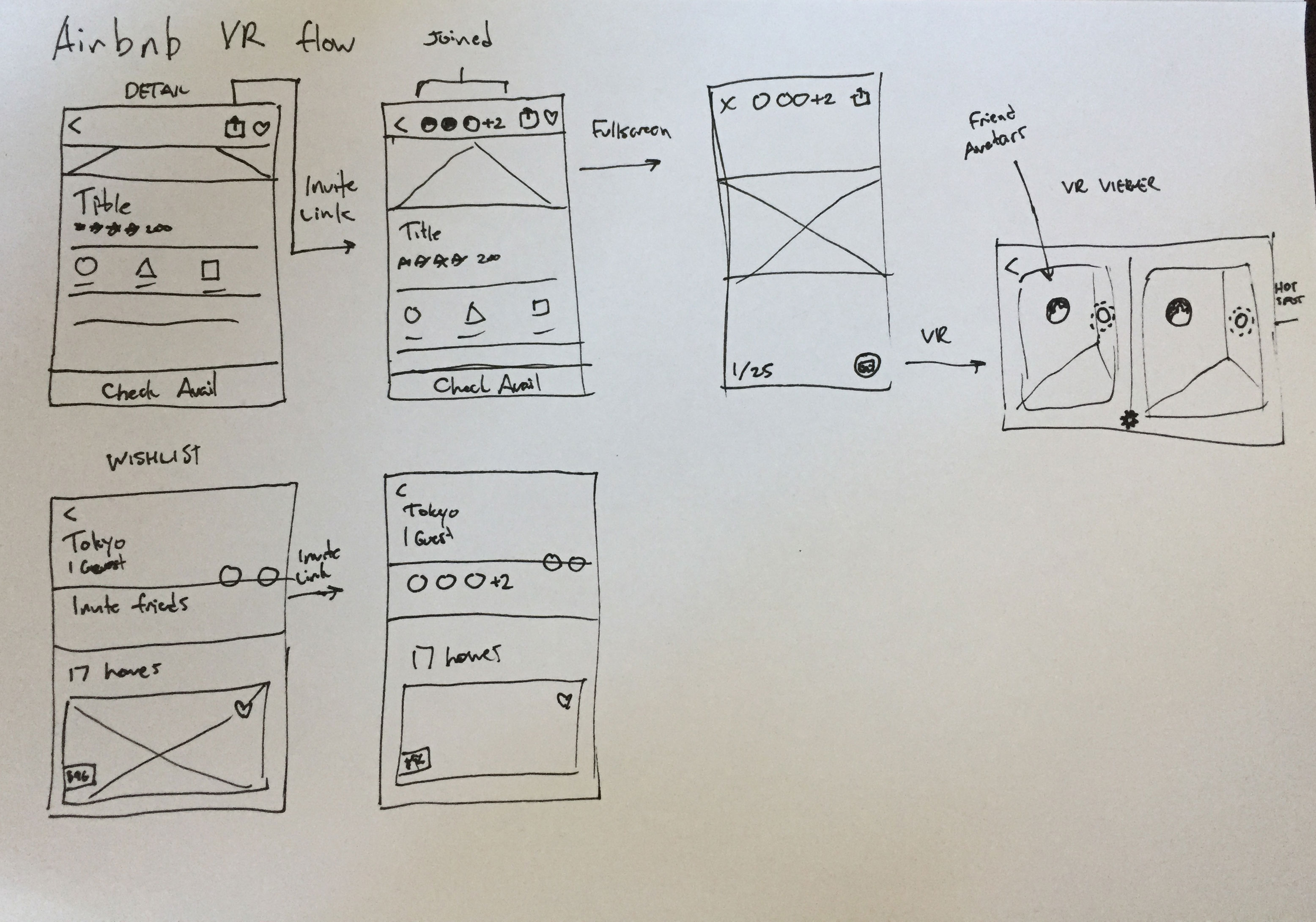 These sketches show how collaboration and VR could fit right into Airbnb's existing UI and flow.

While viewing a photo of the property, there could be an option to hop into VR where friends could navigate through the home using hotspots.

Mobile VR is still pretty new, and I didn't want to alienate people who didn't have a VR headset such as a Google Cardboard. This meant easing people into VR by introducing users to a monoscopic view which uses your phone as a "portal" to view the 360 photos.

From there, a quick button tap on the recognizable "Google Cardboard" button will take them into a stereo VR view ready to be put into a head mounted display.

I implemented avatars and real-time voice chat to allow people to chat about the property as they browsed the listing. To add a human touch, you could see what your friends were looking at so that you could share in the excitement of discovering the hot tub or balcony view. Linking everyone else's avatar to their head movement provided a human touch to the experience and allowed everyone's personality to come out. 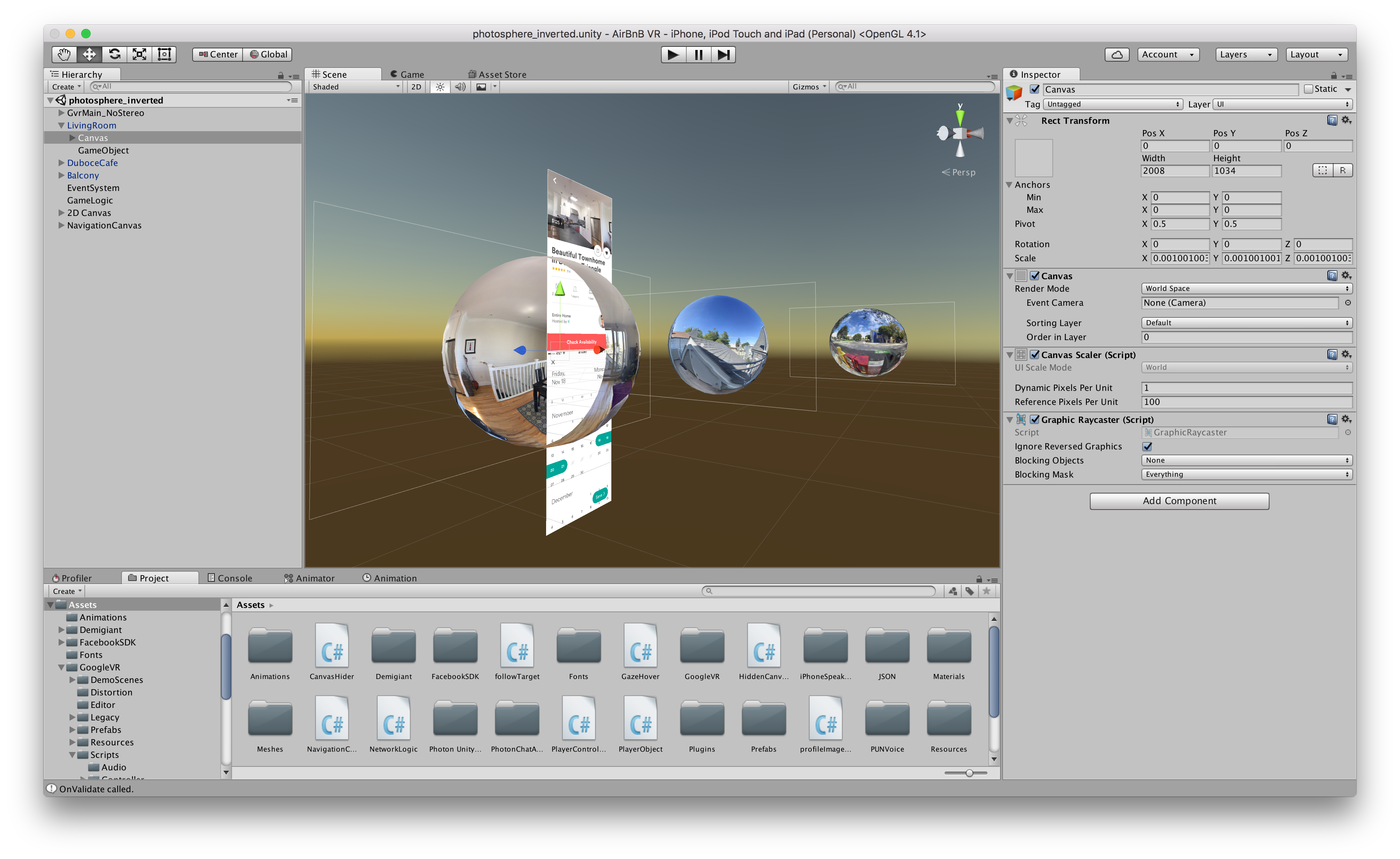 I captured photospheres of my place and neighborhood with my phone and created a working multiplayer prototype with Unity's game engine.

I approached several friends who use Airbnb regularly to plan group trips to get a sense of whether or not the concept was sound. Showing them the prototype and walking them through a group trip scenario helped draw out both good and bad reactions to the concept. 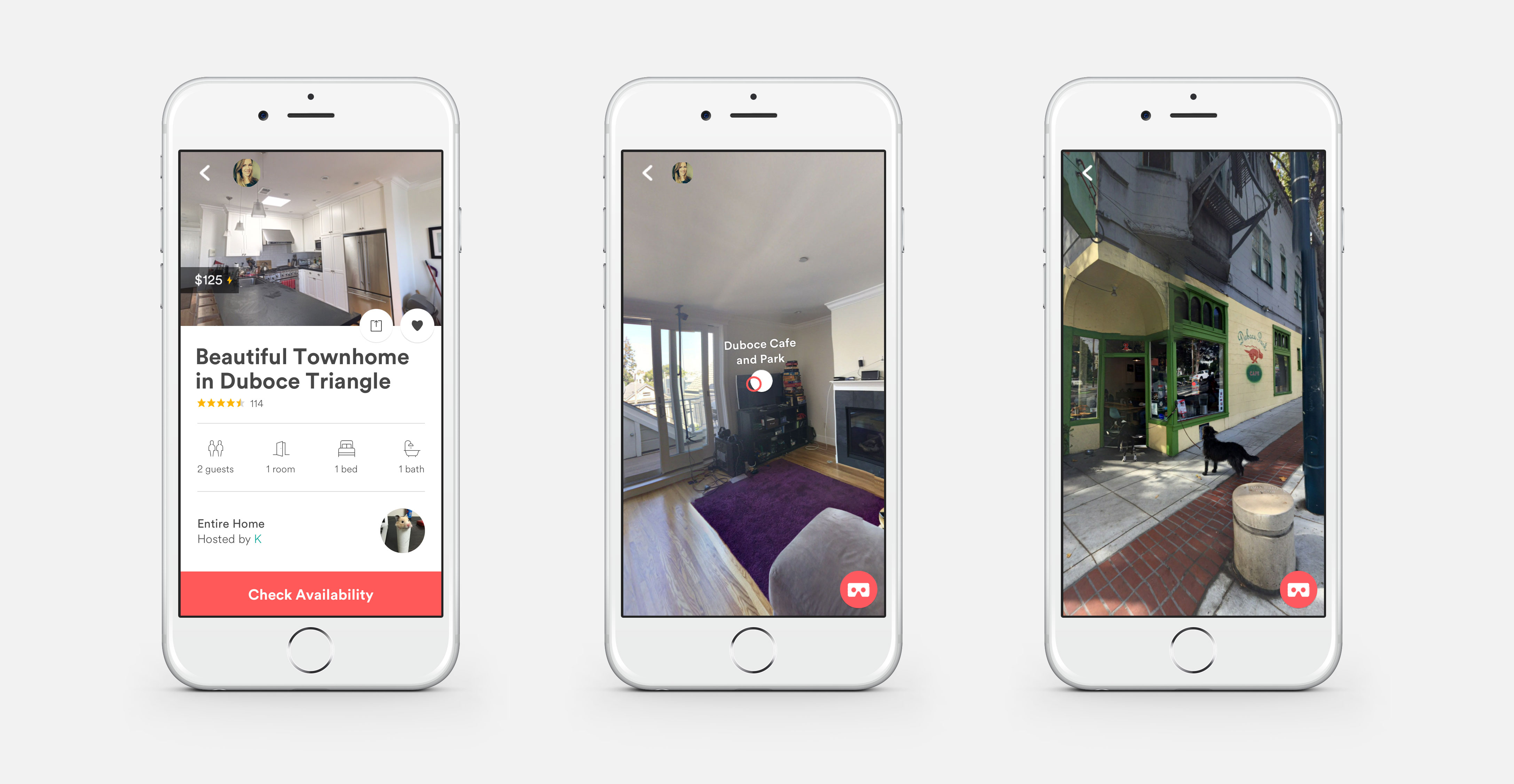 People loved the transparency that 360 photos offered. It put people at ease about whether or not the photos had been strategically taken to hide any shortcomings.

Everyone thought that real-time collaboration should be built-in. In an age where Google Docs is the norm, there's no excuse not to have real-time browsing. In addition, the 360 photos were exciting, and helped properly frame expectations for the skeptics used to being let down by sneaky camera tricks. Finally, they really enjoyed the in-app voice chat as well, but wanted an explicit way to join calls and mute the audio for privacy reasons.

Seeing the environment in VR felt much closer to actually being there than 2D photos, but asking users to put their phone into a VR headset to view a few images of a listing was a big hurdle.

What could use improvement

While monoscopic viewing felt natural, putting their phone into a VR device was asking too much. It was a cool party trick, but the 360 photos didn't provide enough value or interactivity to make the effort to pull out the VR headset—if they even had one. Perhaps if the photos were stereoscopic to get a better sense of scale, it might be worth stepping into VR.

I put together a mock commercial to tie together the narrative of how this could be used. The story shows two friends being inspired by a listing for their upcoming group trip.

It's hard enough to get a single person to make a decision. When dealing with multiple stakeholders, we may need to rethink the way we encourage users to get across the line. Perhaps we can draw learnings from cooperative multiplayer games to encourage independent discovery and—dare I even say—fun?

I enjoyed working on this project and it revealed some interesting insights about how VR and real-time collaboration could benefit a platform such as Airbnb. Imagine what it could do for other group buying experiences such as apartment hunting, house buying, travel, vacation destinations, and even music festivals!